Gabriel Iglesias is a veteran comedian and actor from America. He is currently in a relationship. 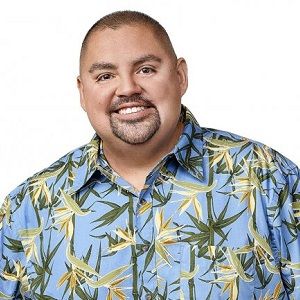 I just know you can not be on top forever. There's always going to be the next guy, and if I'm going to go down, I'd like to know I helped the next guy take my spot. You can't prevent the inevitable, but you can join the ship.

You wonder why I only talk about my personal life. But that's all I've ever done.

I'm all about showing people that I'm a little messed up, I have a lot of the same problems you have. By exposing myself and putting myself out there, people can relate to me and my act won't grow stale. I mean, nobody wants to hear a comedian say, 'Life is great.'

What is the relationship of Gabriel Iglesias?

Currently, Gabriel is dating Claudia Valdez. He has been dating her since 2008. As a couple, they have been living happily for almost nine years. So far, there are not any rumors of disputes and break up of them. Claudia has a son from her first marriage named Frankie. Apart from her, Gabriel has not seen with anyone and never spoke about his personal life in the public and media. However, he had affairs with some girls in the past. As of now, Gabriel and Claudia have maintained a perfect relationship and living elegantly.

Who is Gabriel Iglesias?

Gabriel Iglesias is a veteran comedian and actor from America. He is also an author and producer. Furthermore, Gabriel came into the spotlight from the show I’m Not Fat… I’m Fluffy.

In addition, he has also appeared in many movies such as The Nut Job, The Fluffy Movie, The Star, and much more.

Gabriel was born to Esther P. Mendez and Jesus Iglesias on July 15, 1976, in San Diego, California, United States. He is the youngest child among six children of his parents.

His mother’s name is Esther P. Mendez and his father’s name is Jesus Iglesias. Furthermore, The Fluffy Movie star grew up in Riverside, Corona, Santa Ana, Baldwin Park alongside his siblings.

Concerning his education, there is not any information regarding it but he had said in an interview that he was not popular in his school.

Gabriel began his acting career appearing in season 6 of the Nickelodeon sketch comedy series All That. Prior to acting, he worked for a cell phone company in Los Angeles. After leaving the job, he began to concentrate on comedy.

Although, it didn’t work out and was thrown out from his house and lost his car. Later, it all started to work in the favor of him as he starred in All That followed by Premium Blend.

In addition, Gabriel also participated in the fourth season of reality TV series Last Comic Standing in 2006 and also reached to the final eight comics.

As a comedian, he came into the spotlight after appearing the 2007 TV show Hot and Fluffy. After two years, he again stole the show from I’m Not Fat… I’m Fluffy.

In 2011, Gabriel produced and hosted the show called Gabriel Iglesias Presents Stand Up Revolution which lasted for three years. Besides this, he has also featured in the WWE Smackdown and WWE Tribute to the Troops.

Recently, Gabriel has also starred in several television shows such as Smurfs: The Lost Village, The Nut Job 2: Nutty by Nature, The Star, and much more.

As a successful actor and comedian, The Fluffy actor bags a massive amount of money from his work. Currently, his salary records at $10 million annually. Furthermore, he has a whopping net worth of $40 million as per 2022’s data..

Being a brilliant comedian and host, Gabriel has won a couple of awards in his career. The city of El Paso, Texas has given him several awards which also include the key to the city and the Beacon of H.O.P.E Award.

Back in November 2014, there was a rumor that Gabriel Iglesias had died. Later, he took Twitter to respond to it and clarified that he is alive.

He stated, “Thank u to everyone who texted, called, and emailed asking if I died. I love u all!!!!.” There was a controversy when Gabriel was kicked out of the show Last Comic Standing.

The reason is said to be the breach of contract. During the show, he was talking to someone on phone.

He has always been criticized for wearing Hawaiian fashioned clothes and being fat.

Gabriel is a chubby guy with a height of 5 ft 8 inches. Once, for The Fluffy Movie, he has gained so much weight and weighs almost 202 kg. Furthermore, he has dark brown eyes and black hair.

Gabriel is hugely active on social media. He regularly gives updates and also posts photos and videos on his social accounts such as Facebook, Twitter, and Instagram.

In addition, he also runs a YouTube channel named Gabriel Iglesias, which has more than 3.2 million followers.

The Controversial Video of Ray William Johnson’s career; being sued; result of the lawsuit. Is his channel going down?!