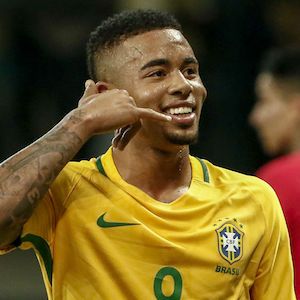 I'm a normal person, and I like living this way - and always with a smile in my face

I was very happy to have the opportunity of getting to know Manchester. It's such a good city

I am very self-critical and always will be. I think this makes me want to improve, always. But just because I'm self-critical and say what I thought of my performance in a game, it doesn't mean I will bring myself down, ever.

As Gabriel is still young he has not been engaged in any kind of relationship. In coming future, he might be dating a beautiful lady that would make his life so beautiful.

Currently, he is living a single life.

Who is Gabriel Jesus?

Gabriel Jesus is a professional soccer player who plays as a forward for the Brazil national team and  English club Manchester City and has been invited to the 2018 FIFA World Cup in Russia.

The young forward Gabriel was born in the Brazilian Municipality of São Paulo as Gabriel Fernando de Jesus on 3 April 1997 to his mother Vera Lucia Diniz de Jesus and his father Dinzi De Jesus.

He began playing the football in the streets while growing up as like other children. His mother raised him alongside his 3 other siblings in a family although they were poor and they still managed to be very united in a family.

Vera Lucia Diniz de Jesus, his mother sometimes did 3 jobs at a time to support her children. This was due to the abandonment by his father to the family when the kids were still very small, with Gabriel as the youngest.

There are no records available at the current time regarding his educational background.

Gabriel had signed youth contact at the age of 16 for Brazillian club Palmeiras and had scored 54 goals in 48 matches in his youth tenure at Palmeiras.  He got signed a professional senior team contract in January 2014 with Palmeiras.

Against Agremiação Sportiva Arapiraquense he had scored his first goal for Palmeiras in the cup tie with a 1-0 win. He played for Palmeiras until January 2017 and made 28 goals in 83 appearances.

He got transferred to Manchester city due to his amazing performance in 2015/16 season with Palmeiras. He was paid $39 Million during August 2016 as the transfer fee. But his transfer was finalized only on January 2017 due to work permit.

He made one and assisted one as Man city won against West Ham in his first full game for Man City in the league. He then had completed the season with seven goals and four assists in the league.

City started with a bang, and Pep Guardiola’s master tactics in 2017/18 season. City won 18 league games in a row which finally made him paid off. He then made his first goal on 26th August in a 2-1 win over Bournemouth in 2017/18 season.

In Premier league table, he had made the last goal of the season against FC Southampton guiding city to 100 points. Jesus had appeared in various youth levels for Brazil as he had become the part of the squad that finished runner-ups in 2015 under 20 world cup.

Gabriel got the selection in a senior team squad in place of injured Douglas Costa but missed the final selection due to lack of U.S visa. On September 1, 2016, he made his debut for the Brazillian senior team against Ecuador in 2018 Worldcup qualification match scoring twice in that match as Brazil won easily by 3-0.

He got into a top scorer for Worldcup Qualifiers in the CONMEBOL section scoring 7 goals in 10 matches. He has also been selected in 23 man squad of Brazil National team for World cup Russia 2018.

There are no records available at the current time regarding his lifetime achievements and awards.

Gabriel’s weekly salary is estimated to be $101,684 and the net worth is around $3 Million.

There are no any rumors regarding his personal life and the controversy available at the current time as he has not revealed it to any media.