Gabriel Landeskog is a Swedish professional ice hockey player. He is currently in a relationship with Mel Shouldice

Gabriel Landeskog is a 24-year-old player. He is unmarried till now. He is currently in a relationship with Mel Shouldice. There is no information about when they started dating each other. The couple has been together for a few years now and their relationship is going very well. There are no other records of his past and present relationships. 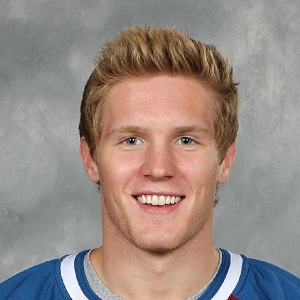 Who is Gabriel Landeskog?

Gabriel Landeskog is a Swedish professional ice hockey player. He currently plays as a forward for the Colorado Avalanche of the National Hockey League (NHL). He is also the captain of the team. In September 2012, he became the youngest captain in NHL history at 19 years and 286 days.

Gabriel was born on 23 November 1992, in Stockholm, Sweden. He is the son of former Swedish Hockey League defenceman Tony Landeskog, who currently works in the insurance business. His mother Cecelia is a chef and cooking instructor.

He has an elder brother named Adam Landeskog and a twin sister named Beatrice. His nationality is Swedish and he is of Swedish ethnicity. He moved to Canada by himself at age 16 in time for the 2009–10 OHL season.

Talking about his education, he attended Eastwood Collegiate Institute.

Gabriel was initially drafted in the first round, third overall by the Plymouth Whalers of the Ontario Hockey League in the 2009 Canadian Hockey League Import Draft. He began playing in NHL in the 2011-12 season. Landeskog was drafted 2nd overall by the Colorado Avalanche in the 2011 NHL Entry Draft. He scored his first NHL goal on 12 October 2011 against the Columbus Blue Jackets. After that, he played a season with Djurgårdens IF and returned to Colorado Avalanche in the 2012-13 season.

On 4 September 2012, the Colorado Avalanche announced Landeskog as team captain. At that time, he became the youngest captain in NHL history. He scored his first career NHL playoff goal on 17 April 2014, against the Minnesota Wild.

Since then, he plays as a forward and serves as a captain for the team. He has represented team Sweden in several tournaments. With his national team, he won the Ice Hockey World Championships in 2013 and 2017. He has an annual salary of 4.5 million dollars. His net worth is unknown to the media.

He has a height of 6 feet 1 inches with body weight 98 kg. He has golden brown hair color and his eye color is blue.