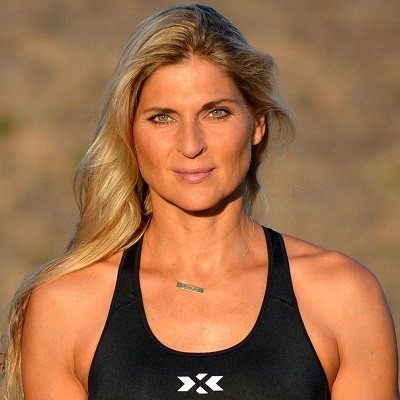 Once I got past my anger toward my mother, I began to excel in volleyball and modeling.

Gabrielle Reece is married to Laird Hamilton. Her husband, Laird is a big-wave surfer. The couple got married on the 30th of November 1997.

Also, she has a stepdaughter, Izabela from Hamilton’s previous marriage with the designer, Maria Souza. Her family loves to spill their times in their residents in Hawaii and Malibu, California.

Who is Gabrielle Reece?

American Gabrielle Reece is a former Volleyball player, actress, and model. She is renowned as Christina Hansel of the movie Cloud 9.

Last, in 2020, she appeared in the short video, The Protectors as a Guest.

Gabrielle Reece was born as Gabrielle Allyse Reece on the 6th of January 1970 in La Jolla, California. She is of Welsh ethnicity. She happens to be the single child to father, Robert Eduardo Reece, and mother, Terry Glynn.

Her father, Robert was killed when in the plane crash. At the time, she is only 4 years old. She spent her childhood in Saint Thomas, U.S. Virgin Islands. Also, she was raised by her mother and stepfather. Later, she moved to the U.S mainland in her 11th grade. After that, she got enrolled in St. Petersburg, Florida.

In school, she got introduced to Volleyball. Also, she was really good at the sport. Later, she joined Florida State University in a volleyball scholarship. She graduated from the University with Honors in Communication.

She used to play for the University’s volleyball team. Also, she is one of the best players the team ever has. Also, she two records solo blocks (240), and total blocks (747) still stand till the date.

After graduating from university, Gabrielle Reece took volleyball as her professional career. Starting from 1993 to 1996, she played the captain of WBVL kills. At the time, she trained hard to hone her skills in 2-person beach volleyball. In the year 1994-95, she got honored as the title Offensive Player of the Year.

Moving forward, in 1999-2000, she competed 4 on 4 Olympic challenge series. Also, she went for the FIVB Beach Volleyball World Tour.

Since University days, she was talking modeling career parallelly with Volleyball. However, she started modeling in High School. To boost her modeling career, she traveled to New York and Italy for training and various competition.

During her sophomore year, the magazine, Elle named her as One of the Five Most Beautiful Women in the World. As a model, she has featured the covers of magazines like Elle, Shape, Harpers’ Bazaar, People, and Fitness.

Apart from modeling, she has also tried her luck in acting too. In 1995, she entered the TV industry with the series, The Extremists. Following that, she has appeared in movies like Gattaca and Cloud 9. Besides that, she hosted the shows like Insider Training, NBC’s Gravity Games, and STRONG.

In 2013, she has published her debut book, My Foot Is Too Big for the Glass Slipper. Within no time, the book became the New York Times Bestseller.

Apart from that, she has written for Shape, Men’s Fitness, and Elle Magazines on topics related to Health and Fitness. Also, she has contributed  The Huffington Post and Los Angeles Times Magazine too.

Apart from that, she also earns as a writer and actress too.

Gabrielle Reece is a brown-eyed brunette. Her height is 6 feet 3 inches and weighs around 77 kg. Also, her body measurements are 36-24-35 inches.

In 2013, she made headlines due to some lines of her book, My Foot Is Too Big for the Glass Slipper. In the book, she defined feminine as being soft, receptive, and submissive. However, some interpretations of the feminine didn’t sit well with her readers.

Due to this reason, she faced a huge backlash for the public. According to her people are taking it the wrong way. During an interview, she said that she believes women being submissive in the relationship is a sign of her strength, not her weakness.

You may also read the bio of David Lee, John Stones, and Kennedy Summers.