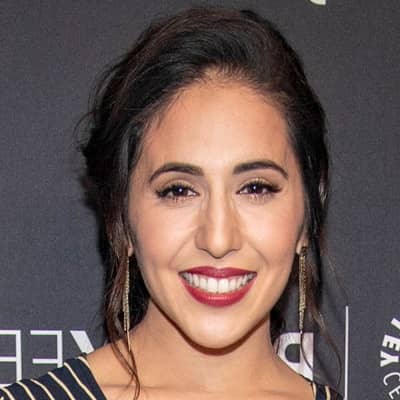 Gabrielle Ruiz’s current relationship status is married also she is pregnant. She is married to Philip Pisanchyn who works as a senior lighting designer at Bentley Meeker in New York City, on dating service Match.com.

On August 4, 2016, the couple wedded in Bella Casa Villa in Saint Martin. Sadly, she lost her first child because of a miscarriage. Again, the couple is expecting their baby in 2021.

Who is Gabrielle Ruiz?

Gabrielle Ruiz is an American actress, producer, activist, singer, and mentor. She is best known for the role of Valencia Perez in the series Crazy Ex-Girlfriend on The CW.

She holds an American nationality and belongs to the mixed ethnicity of Mexican and American. Her birth sign is Sagittarius. Currently, she lives in New York.

Both her grandfather were in defense and served the country.

She studies high school in public school. Then, she graduated from Oklahoma City University with a Bachelor of Fine Arts in Dance Performance in 2007. In college, she was a member of the American Spirit Dance Company, OCU Rhythms, Numerous Musicals, Work-study, and the Alpha Phi women’s fraternity.

After completing her graduation, she has been seen in Broadway shows title If/Then performed in Richard Rodgers Theater. Also, she appeared in many Broadway shows such as Evita, In the Heights, A Chorus Line.

She grabbed the audience when she features in the role of Valencia Perez on Crazy Ex-Girlfriend (2015-2019). It has been released through MMXVIII CBS Studios Inc. and Warner Bros. Entertainment Inc. She is also associated with Rachel Bloom in this series.

In 2014, Gabrielle debut in film in the role of Maria in Sex, Love, and Salsa movie. Recently, she worked as a co-host alongside Pallavi Sastry of the What Are Friends For Podcast. Besides the entertainment sector, she is also a motivational speaker and she choreographs.

In 2019, Alpha Phi International Women’s Fraternity hand over the Ursa Major Award to Gabrielle. Also, she was nominated as Best Supporting Actress at RIFE’s Film Festival Awards for her work in Sex, Love, and Salsa Movie.

In November 2019, She had a miscarriage where she has gone through all the emotions shocked, Scared, and numb. She has also shared on her Instagram about this.

Gabrielle has a slim body type. She is 5 feet 4.5 inches tall approximately and her weight is around 55 kg. Her eyes color is Dark Brown and her hair color is Black.