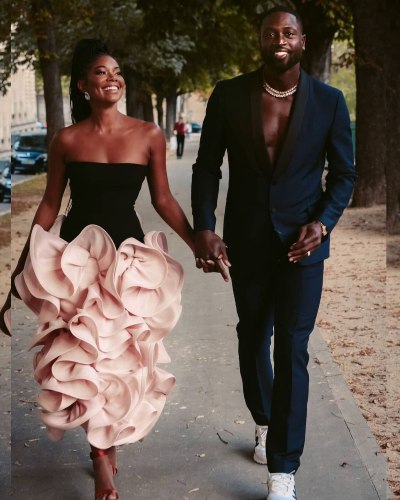 Gabrielle Union and her husband Dwyane Wade are spreading love in the air! The married couple celebrated their seven years of marriage on 30th August 2021.  She shared a video slideshow as their seventh-anniversary celebration. The slideshow consists of pictures of the family throughout the years. The video started with their special handshake at their 2014 wedding at the Chateau Artisan castle in Miami.

They had the highlights from their wedding which was set to the song Ain’t No Stopping Us Now which included pictures of their daughters Zaya Wade and Kaavia James Union Wade. She captioned the Anniversary post,

“Ain’t No Stoppin Us Now. 7 years and a lifetime to go. My best friend, the coolest homie, mentor and inspiration, my love, my husband. I 🖤 you @dwyanewade Happy Anniversary baby,”

Her husband Dwyane reposted the video on his Instagram story and wrote,

Likewise, Gabrielle posted a series of pictures from the pre-anniversary celebration. In the posted pictures she and Dwyane partied with friends at a club in Saint-Tropez where she wore a light-yellow skirt and matching crop top featuring gold chains across the belly. She wrote,

“Happy Day Before Our 7th Anniversary. We’re just getting started.”

How much is the net worth of the couple?

In February 2020, they purchased a lavish mansion in Hidden Hills, California. The mansion is for $20 million and is 22,000 square feet. The three-story property consists of a home theater, poolside cabana, infinity pool, and 12-car garage with an automatic turntable.

Gabrielle Union is an actress, activist, model as well as author. She belongs to American nationality. She had started her career in the 1990s, appearing on television sitcoms and appeared in teenage comedic films, She’s All That and 10 Things I Hate About You in 1999 and Bring It On in 2000. Read more bio…