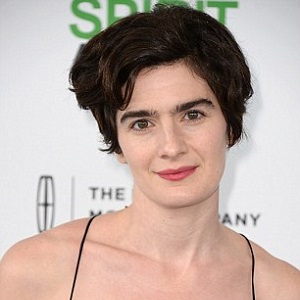 I think sexuality is fluid, and we have such a strange relationship to it in this country. It's been so fixed and so controlled for so long

I met Jill Soloway at Sundance a couple years ago. I was there for 'Crystal Fairy', and she was there for 'Afternoon Delight'. She reached out and wanted to get together.

Gaby Hoffmann is in a relationship. She has a daughter named Rosemary born in November 2014 with her longtime boyfriend, cinematographer Chris Dapkins.

She is residing in the Fort Greene neighborhood of Brooklyn with her partner and child.

Who is Gaby Hoffmann?

Gaby Hoffmann is an American film and television actress. She is renowned for her roles in Sleepless in Seattle, Transparent, and Girls.

Gaby Hoffmann was born in Manhattan, New York on January 8, 1982. Her nationality is American and ethnicity is mixed(French, Spanish, German, Irish, English, Italian).

They soon divorce and she was raised by her mother at the Chelsea Hotel in New York. Her father did not have a significant presence in her life.

Hoffmann attended elementary school in Manhattan at P.S. 3 then another school in Hell’s Kitchen. After she moved to Los Angeles in 1994, she attended the Buckley School.

After graduated from Calabasas High School in 1999, then went to New York’s Bard College and specialized in literature and writing.

Gaby Hoffmann began her acting career at the age of four to help pay the family bills by acting in commercials. In 1989, she starred in her first movie, Field of Dreams with Kevin Costner.

In 1989’s Uncle Buck followed, working beside with John Candy and upcoming child star Macaulay Culkin. However, she grew tired of the rigors of screen performance and temporarily retired.

She went on to star in This Is My Life (1992), Sleepless in Seattle (1993) with Tom Hanks and The Man Without a Face with Mel Gibson who directed the film. In 1994, Hoffmann was given the starring role in her own sitcom someone like Me about a young girl, Gaby, and her dysfunctional family.

Between 2003 and 2007, Hoffmann largely concentrated on a theater career in New York. Since 2007, Hoffmann has made a gradual return to film acting. In 2007, she starred in the film Severed Ways: The Norse Discovery of America.

In 2008, she appeared in Guest of Cindy Sherman, a documentary on art-scene commentator Paul Hasegawa-Overacker’s relationship with enigmatic photographer Cindy Sherman. Hoffmann had a supporting role in Todd Solondz’s Life During Wartime and the thriller 13 with Mickey Rourke released in 2010.

In 2013, she completed work on the lead role of a Web Series entitled Lyle, created by Stewart Thorndike and Jill Soloway. It was shot in NYC. In 2016 she appeared in the video as on stage ”stand-in” during the Nostalgic For The Present concert tour of Australian singer Sia Furler for her song, “Unstoppable”.

She has a net worth of $1.5 million but her salary is not revealed yet.

According to rumors, Gaby delivered her daughter Rosemary at her home. There was a rumor once that she is a lesbian. There are no other desperate rumors regarding her professional and personal life.


Gaby Hoffmann has a height of 5 feet 7 inches. Her body weighs 60kg. She has dark brown hair and brown eyes.