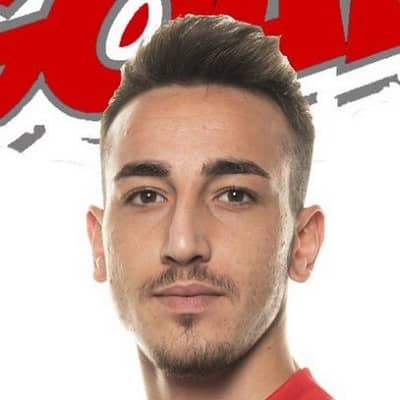 At his age, of course, many of his fans and followers want to know about his life, girlfriend, and relationship status. This talented football star is not much open regarding his personal life. Looking at his Instagram, we can be sure that he is romantically involved with his girlfriend, Rachele Risaliti. She is Miss Italy, 2016. The lovebirds are quite precious and appreciated by their fans and followers.

Who is Gaetano Castrovilli?

Gaetano Castronilli is an Italian professional football player. He is known for playing as a midfielder for Italian Clubs, Fiorentina. Likewise, his ball control, dribbling skills, prompt decision, quick reaction, and long-range vision make him an accomplished Midfielder.

Currently, Gaetano is one of the players who is included in Italy’s squad for UEFA Euro 2020 by manager Roberto Mancini.

Likewise, he has not disclosed any information regarding his parents. Similarly, he has a brother whose name is not revealed. He is very close to his family. Alex grew up playing football from an early age. In fact, he started to play football as soon as he learned to walk.

In addition, he is of Italian nationality and his ethnicity is not known. He follows Christianity. His birth sign is Aquarius.

Castrovilli started playing football with the Minervino football school from 2006 till 2008. At the age of 11, he joined the Italian Club, Bari youth Team. He made his professional debut for the first time in Serie B in 2015 and he made 11 appearances for the club.

In 2017, he signed for Fiorentina in a loan deal leaving his first club Bari. For Fiorentina, he made 67 appearances with 8 goals from his side. The same year, he was sent on loan to play for Serie B Club, Cremonese for two seasons. For Cremonese, he made 53 appearances in total, scoring 5 goals.

Castrovilli left Cremonese and returned to his former club Fiorentina in 2019. Gaetano is currently playing in the same team as a forward. His current contract expires on June 30, 2024. He also plays at the international level for the Italian National team.

There are no rumors and controversies about him. He has succeeded to keep his personal and professional life away from Scandals.

Castrovilli is a sportsman with a good personality. Likewise, he has a decent height of 5 feet and 9 inches and his weight is 71 kg. He has light brown hair and dark brown eyes. Similarly, he has a fit and athletic body.

Click the provided link to know more about Neymar, Cristiano Ronaldo, and Messi !!