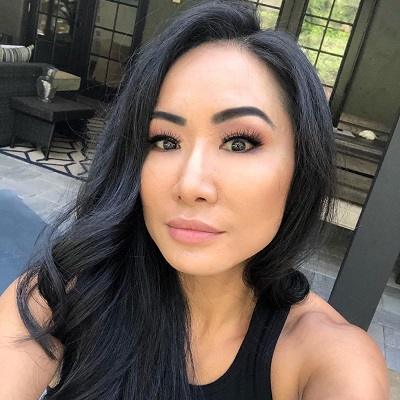 My honest opinion, and this is only my opinion and I don't know this as fact, I just think Vince McMahon did not like women's wrestling.

Couple Made in Heaven!!!

Gail Kim is a married woman. Gail’s husband, Robert Irvine is a celebrity chef by profession.

The wedding took place on the 1oth of May 2012 at Charles Krug Winery in St. Helena, CA. Her wedding was a total surprise for her not less than a fairy tale wedding where she was picked be horse-drawn carriage giving her short tour of the vineyard.

The wedding was performed on the presence of the 160 guests from the Food Network and Wrestling World. Also, Japanese Susi made by the groom were also served during the reception party. Later the newlywed couple celebrity celebrated their honeymoon in Greece.

The love story started when they met the set of Dinner: Impossible.

Who is Gail Kim?

Gail Kim is the first female TNA Wrestling Hall of Fame-winning Wrestler. She is renowned for her wrestling skills.

Currently, she is the manager of Impact Wrestling.

Gail Kim was born on the 20th of February 1977 in Toronto, Ontario. Her parents are of Korean ethnicity.

To date, she has not disclosed any information about her mother and father.

She joined York Memorial Collegiate Institute to study Kinesiology. Later, she was transferred to Ryerson University and studied nutrition.

– After graduating from the University, Gail Kim joined Ron Hutchison’s School of Pro Wrestling in Toronto to be a professional wrestler.

– In December 2000, she debuted in Southern Ontario-based Apocalypse Wrestling Federation wearing a mask.

– Later, in 2002, she joined the World Wrestling Federation and was trained for over eight months under it. On the 30th of June 2002, she debuted as a fan favorite.

– In 2004, she fought for the title of Women’s Champion Victoria. However, on the 3rd of November 2004, WWE released her for cost-cutting.

– After that, she started an independent circuit that appeared in the All-World Wrestling League. Eventually, she signed with TNA and made her debut on the 8th of October 2005. On the 14th of October 2007, she earned the title of TNA Women’s Knockout Champion.

– In mid-August 2008, she left TNA after the contract expired and rejoined WWE. She returned as a fan favorite on the 27th of March 2009 and interrupted the WWE Divas Championship between Maryse and Michelle McCool.

– She was traded to the Raw brand by Smackdown. Till 2011, she fought under the brand. On the 30th of September, she was released after the expiry of the contract and returned to TNA. After that, she fought for TNA until her career as a wrestler ended.

– On the 3rd of February 2018, she took retirement from wrestling about started to work as the manager of Impact Wrestling.

Also, her current job as manager of Impact Wrestling pays her in the range of $32k to $120k.

Besides that, her husband, Robert Irvine has an estimated net worth of $12 million. That makes their net worth $13 million as a couple.

Recently, Gail has made a controversial statement regarding racism in WWE. During an interview with Lilian Garcia on Chasing Glory, she recalled some of her bitter experiences with racism.

Also, she stated that the WWE does not care about anybody being racist as they also have the same thought about the matter. After the statement, WWE asked her to justify her statement.

Gail Kim is a black-eyed brunette. Her height is 5 feet 4 inches and weighs around 54 kg.