Any previous relationship or partners of Grandma before her current husband are also unknown. 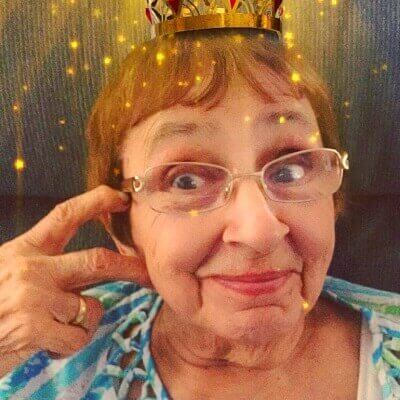 Who is Gangsta Grandma?

Gangtsa Grandma is an American grandmother popular for her hilarious lip-sync performances and challenges on Tiktok.

She is an internet sensation and has gathered millions of fans due to her high-quality humor and energy despite her old age.

Gangsta Grandma was born on the 17th of July, 1929, in Boston, Massachusets, in the U.S. She recently celebrated her 91st birthday in July. Her nationality is American and her ethnicity is Caucasian. Information on her parents or early childhood is not available.

Grandma has not given any information on her educational background until now. But given the fact that she worked as a librarian before coming to Tiktok, we can assume that she is well educated.

Gangsta Grandma formerly worked as a librarian before coming into musical.ly (currently TikTok). Her internet career came to be after her grandchildren helped her open her own musical.ly account. She began posting hilarious lip-sync videos to modern-day popular songs.

She also wore outlandish and quirky outfits and accessories including massive glasses, shutter shades, and golden mustaches for her videos. This resulted in hilarious content and due to her sense of humor at such an old age, she quickly gained a lot of fans. She also did several challenges on the app and eventually earned over 2 million subscribers on musical.ly.

She even earned the Shorty Award nomination for Muser of the Year due to her presence on the new-age social media. Grandma also became the subject of many internet memes, which helped even more in increasing her popularity.

Aside from Tiktok, Grandma is also popular on Instagram. She gained a lot of followers on the platform after posting pictures in her costumes from her musical.ly videos. Her grandchildren are responsible for managing her Instagram as well as Tiktok accounts.

Grandma has not made her net worth official but due to her massive popularity on new-age social media, her current net worth is estimated to be in the region of $1 to $5 million. Her annual salary is also unknown and much harder to estimate as currently, she is not much active and because the majority of her salary came from musical.ly, which has now been changed to Tiktok.

In her several years of fame as a social media personality, Grandma managed to stay clear of any rumors and controversies and it doesn’t seem like she will be involved with any negative rumors or controversies in the future.

Grandma has not revealed her physical statistics such as her height or weight on the internet. However, we know from her videos that she has brown hair and brown eyes.

Grandma currently has accounts on Twitter and Instagram, which are managed by her grandchildren. She is not much active on Twitter and only has about 348 followers on the platform.

As for Instagram, she has gathered a following of more than 10.7k people thanks to her posts which include her posing in her outlandish as well as hilarious costumes she uses in her Tiktok.

You may also like to read more about the Bio, Career, Net Worth, Relationships, Social Media, and more about Don Benjamin, Mia Hayward, Vinnie Hacker, and more.