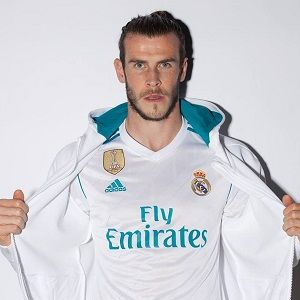 Once you win something, yeah, you enjoy it. But then it's on to the next game

you become stronger, and you see where you have to improve

When you're a sub, it's a game of more than 11 players starting the game.

The 28-year-old Welsh international footballer, Gareth Bale is a married man. However, he got engaged to his long-time girlfriend Emma Rhys-Jones on 17 July 2016.

They began dating from their his high school days. Together, they have welcomed three children, Alba Violet, Nava Valentina, and Alex Charles.

Alba was born on 21 October 2012, Nava on 22 March 2016, and Alex on 8 May. Since their relationship started, they have maintained a sound relationship between them.

Moreover, Bale has never been involved in any affairs to date. Currently, Gareth Bale and Emma Rhys-Jones are enjoying their life along with their children and living elegantly.

Who is Gareth Bale?

Gareth Bale is a Welsh football player. Currently, he plays for Spanish giants Real Madrid as a winger. Previously, he also played for English Clubs Tottenham Hotspur and Southampton.

He is famous for his exceptional pace, free kicks, and skills. Moreover, he has been named Welsh Footballer of the Year six times.

Gareth was born on July 16, 1989, in, Cardiff, United Kingdom. He is the son of Frank and Debbie. Moving towards his nationality, he is Welsh and his ethnicity is English and Welsh.

From the beginning of his childhood, he had a keen interest in football and also began to play from a very early age.

Concerning his education, he attended Whitchurch High School in Cardiff. During high school, he became the favorite player in his school. Furthermore, he also used to play rugby, hockey, and other athletics.

Gareth Bale began his professional football career with Southampton at the age of 16 years playing his first match on 17 April 2006. His first goal came as a free-kick against Derby County in a 1-1 match.

In the very next game, he again scored a free-kick. However, he didn’t stay much longer in Southampton. During his career at Saints, he scored five goals in 40 matches. Later on 25 May 2007, Bale signed a four-year contract with Tottenham Hotspur on a £5 million deal which later rises to £10 million.

On 26 August 2007, he made his debut against Manchester United. Just after a week on 1 September 2007, he scored his debut goal for Tottenham against Fulham in a 3-3 draw. Back in the 2010 league, Bale scored Tottenham’s winning goal in a 2–1 win over Chelsea and also became the man of the match.

Moreover, Bale was also named Barclays Player of the Month for April 2010. For the continued two seasons, he was Tottenham Hotspur Young Player of the Year in 2009-10 and 2010-11.

Besides this, Bale was also PFA Young Player of the Year and FWA Footballer of the Year in the 2012-2013 season. During his spell at Tottenham, the Welsh international scored 42 goals in 146 matches.

He scored his debut goal for Real Madrid against Villarreal. Despite being a brilliant player, his starting phase wasn’t good at all as he faced serious injury.

Later on 30 November 2013, Bale smashed a hat-trick and also assisted Karim Benzema in a 4–0 victory over Real Valladolid. Since then, she has been scoring many goals for the club for the 2013-2014 season. In his first season, he smashed 22 goals in his 44 appearances.

Talking about his international game, he became the youngest player to play for Wales at 16 years and 315 days. In addition, the Welsh international also became the youngest player ever to score a goal for the full Welsh national team scoring a free-kick against Slovakia in the Euro 2008 qualification match. So far, he has scored 26 goals in 68 matches for his national side.

Being a famous footballer, he earns a decent amount of money from his profession. As per the 2021 stats, he earns 31.2 million GBP. Moreover, he has a staggering amount of $145 million as his net worth.

As of now, Bale has won the BBC Cymru Sports Personality of the Year award. Apart from that, he has won several trophies and awards which include La Liga, Copa del Rey, three UEFA Champions League, two UEFA Super Cup, and two FIFA Club World Cup.

Gareth Bale is playing for his country as a forward. The Euro cup matches will take place in different countries which are listed below:

Once, there was a rumor regarding his exit from Real Madrid and joining Manchester Unites. However, he didn’t leave and stayed in Madrid. Apart from that, there is not any controversy regarding his personal and professional life.

Gareth Bale has a height of 6 ft and weighs 82 kg. Moreover, he has a pair of attractive blue eyes and brown hair. Besides this, there is not any information regarding his other body measurements.