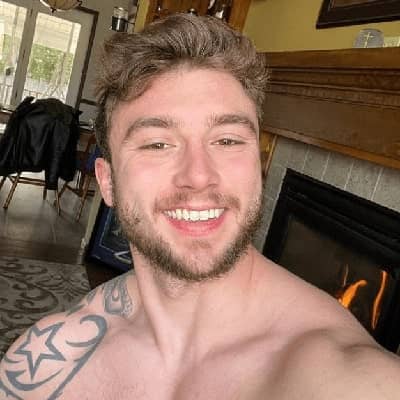 Garett has never spoken about his relationship status in the media. He is also never seen involved in anyone on a romantic level.

As of now, he might be focusing on his career and is living his single life.

Who is Garett Nolan?

Garett Nolan is an American model, internet personality, and online entrepreneur. He is popular for his content on his social media accounts like TikTok and Instagram.

Garett was born on December 11, 1997, in Williamsport, Pennsylvania, United States.

His mother’s name is Sue Cosentine-Nolan. He has also posted a photo with her wishing on her birthday. However, Garett hasn’t disclosed his father.

Similarly, he has not shared any details of his siblings whether he has any or not. Garett grew up in an American family and belongs to Irish descent.

He studied at South Williamsport High School graduating in 2016.

Garett joined USA Cycling in 2012 and learned mountain biking while he was in his school days. Next year he participated in Cross-Country Mountain Bike National Championships. He also became a three-time National Cross Country competitor and rank in the top five nationally.

Garett came into limelight from the social media platform like TikTok and Instagram. His account is one of the first verified profiles on TikTok in the USA. His TikTok profile was ranked at number 9210 in the United States as of 2021.

Furthermore, Garett is also a model. He has been part of various popular modeling campaigns. Garett is currently managed by White Cross Management.

The star has a $500,000 value of total assets collects from his career.

Creators with over a million followers receive earnings from $1,000 to $5,000+ a month. And so Garett also must receive a good earning from his social media.

In September 2020, Garett was into controversy when his exclusive only fans’ videos got leaked by some random internet user on Twitter.

It also called into question for some active US military service members to use the online social platforms. The use of the TikTok app was also banned by the Pentagon, Army, and Navy.

However, a report claims that the regulations are actually vague in this case. It is still unclear as to whether or not Nolan’s and others’ videos actually violated policy.

Standing at a height of 6 feet, Garett has an athletic built well-maintained body. Other information regarding his other body measurements is unknown.

Further, he has a brown pair of eyes with the same brown color hair.

Garett is active on Twitter with around 76K followers, over 367K on Instagram, and around 3K followers on the Facebook page. He also has his own only fan page. He shares his video there with an exclusive monthly membership of $12.99.

His official TikTok account also holds over 11M followers with more than 287M likes. Similarly, his youtube channel also has around 41K subscribers.

You may also read the bio of Alex Lange, Ava Majury, Willow Gait, and Suede Brooks.