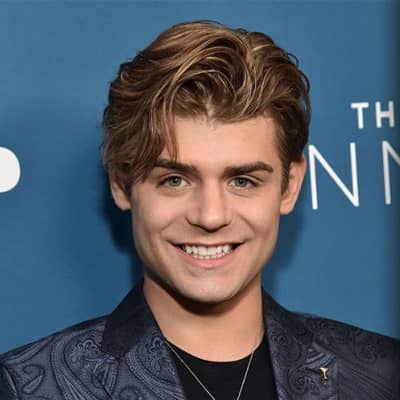 We all fall in love with someone for the person they are - not because of their race, their hair, or any of the frivolous things that go away in time.

I don't really like talking about my personal life.

I haven't been brought down because people are focused on who I'm dating, what I'm eating, or what handbag is the best handbag - that's so cheap to me. But if others want to open up about their personal lives, that is their choice. It's not for me to judge.

After I started being able to grow a beard, I was obviously done at Disney - until I'm old enough to be a parent or an annoying older brother.

What is the relationship of Garrett Clayton?

Garrett Clayton is married to Blake Knight on 4th September 2021. Blake is a screenwriter. Their wedding was at a private residence in Los Angeles with a garden party theme.

The couple is dating since 2011 and engaged in January 2018 in Iceland.

In August 2018, he revealed via an Instagram post that he is gay. Likely, a week later, he was introduced to his boyfriend, Blake through his Twitter.

Similarly, in January 2019, Clayton announced that he and Knight had become engaged a year prior.

In the year 2013, Clayton was dating actress, Claudia Lee. The duo also has a public appearance together and hangs out with others.

Claudia also even opened up about Clayton meeting her parents in an interview in August 2013. But about three years later, they decided to end their relationship and get separated in 2016.

Who is Garrett Clayton?

Garrett Clayton is an American actor and singer. He is known for playing a recurring role in the first season of the family drama series, The Fosters.

His mother’s name is Michandscot Bro. Their family was not very financially stable and he grew up struggling. Although, his family was always supportive in building his career.

Likely, he has a younger brother named Sam Clayton and a younger sister, Olivia Clayton. Garret says that his dad and brother weren’t happy about the news of him being gay.

He belongs of American nationality and is of Multiracial (Lebanese, French-Canadian, English, and Scottish) ethnicity.

Talking about his education, Garrett studied at Crestwood High School. After graduating from high school, he got enrolled at Oakland University. He studied musical theatre at the university.

Garrett Clayton started his career appearing in the horror movie The Tower in the year 2008. Likely, he made his first TV show appearance on the long-running soap opera, Days of Our Lives, and Shake It Up in 2010.

Further, he started to appear in various movies afterward. In the year 2011, he portrays the role of Tad in a movie called Love, Gloria. He then appeared as Blake in the Lifetime movie Holiday Spin in December 2012 along with Ralph Macchio.

Talking about his more works on stage, he plays in the productions of Cruel Intentions: The Musical and Sleeping Beauty And Her Winter Knight. He has also worked for TV shows. Clayton played the role of Dylan in a popular TV show called Shake It Up. Other TV shows to his credits are Win, Lose or Draw, and The Client List.

Garrett has also sung many songs like I put a smile on you and Shake it up.

Clayton has a net worth of around $3 million as of now as of 2022. His income source is from his acting.

And he also earns from his brand endorsements with various brands such as Nintendo, Disneyland, Ole Henriksen, and Joseph Michael Hair.

This actor prefers to have a low profile when it some to any rumors. He is also not surrounded by any desperate scandals.

Talking about her appearance, he has a chiseled jawline with a beautiful pair of green eyes. The actor has light brown colored hair but he prefers to dye it blonde.

You may also read the bio of Melissa Reeves, Kyle Lowder, Toni Lawrence, and Shely Young.