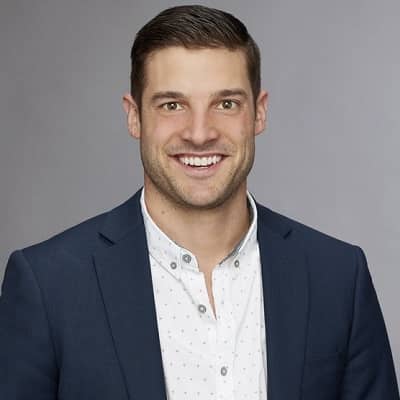 Uh, it means the world! I love you so much! Becca... Rebecca Jill Kufrin, my Becca, will you marry me?

Garrett Yrigoyen was in a relationship with a TV star Rebecca Kufrin since 2018. This couple met on the reality show The Bachelorette on its 14th season.

However, recently in Aug 2020, this couple separated their ways.

Previously, he was married to Kayla Yrigoyen in 2015. This couple got divorced in 2016.

Who is Garrett Yrigoyen?

Garrett Yrigoyen is an American reality star and a model. He is best known for appearing on The Bachelorette in the 14th season.

This reality star was born on 24 February 1989, in California, the United States with a birth name Garrett Vincent Yrigoyen. His father’s name is David, and his mother’s name is Barbara.

He has a brother. Garrett attended Wausau East High School. He graduated with a Bachelor’s degree in community health science from the University of Nevada-Reno.

He belongs to Basque descent.

Earlier, he used to work as a medical sales representative. Before appearing on The Bachelorette, he was a baseball pitcher and competed on different games.

He was a right-handed pitcher and played for one season with the Wisconsin Woodchucks in Wausau. This star is completely outdoorsman who loves fishing, snow-shoeing, and hiking.

In 2018, he appeared on ABC’s dating reality series The Bachelorette to win the heart of Becca Kufrin. He made his first impression on Kufrin by pulling up a minivan with a soccer ball, car seat, and diaper bag. Garrett says Becca ‘One day I hope to be a great dad and an awesome husband’.

Becca seems happy and impressed by this star. He earned rose after their date guaranteeing him in the Top 21. Afterward, he became the winner of the 14th season of this reality series and also won Kufrin’s heart.

The average salary of the reality star in the US is $75,000. Meanwhile, according to some sources, the estimated net worth of Garrett is estimated to be $1 million.

He came under the controversy when revealed that he liked offensive posts on Instagram that mocked the immigrants, liberal women, and trans community.

Later, Yrigoyen apologized on social media for the offense and hurt that liking the post had caused and told he will be more mindful of what he likes in the future.