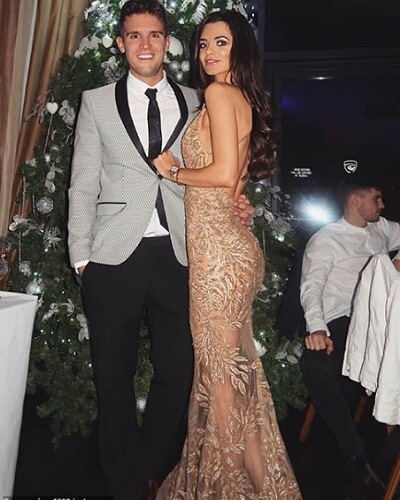 Update: Gaz Beadle and Emma McVey married in July 2021. She gave birth to their 2nd child Primrose in 2020.

The reality TV star Gary Beadle took to social media to announce his engagement to his girlfriend Emma McVey who is pregnant with their second child together.

Gary, 31 shared the news with his Instagram fans. The reality TV star uploaded a gorgeous selfie of the two together in which Emma is proudly showing off her new sparkler.

Gary is kissing Emma on the cheek and the diamond ring is there shining on Emma’s finger.

And followed it with a ring emoji. They a picture cure collected more than 200k likes, in a matter of one hour on last Sunday.

The gorgeous model Emma also used her social media to share with her fans the happy news. She posted the same image and wrote:

“We have a crazy, exciting couple of years on the way.”

She followed it with a, heart, a baby, and a ring emoji. She was referring to the wedding and arrival of their newborn soon. Her phone St also attracted a lot of messages of congratulations from her fans as well as celebrity friends. The latter included Gary’s Geordie Shore co-star Holly Hagan, Jake Quickenden, actress Helen Flanagan, and Love Island’s Anton Danyluk.

The reality TV star Gary Beadle and his lingerie model girlfriend Emma McVey started dating in August 2016. It has, been a whirlwind and an intense relationship for both. They had split briefly in start of May 2017 but are inseparable since then. In August 2017, they told fans that Emma was pregnant with their first child.

“SO SO SO excited to eventually be able to tell you all this… I AM GOING TO BE A DAD… WE ARE HAVING A BABY..”

Click to read more on Gaz Beadle and Emma McVey’s 6-months-old son rushed to hospital once again! McVey reveals the problem with her child’s health.

She delivered in January 2018 and son Chester was born. And now Emma is eight months pregnant. In June they had a gender reveal party and knew that the new arrival would be a girl. Just last week, she had a baby shower.

Gary Beadle, also known as Gaz Beadle is an English reality television personality. People mostly recognize him for his appearance in the MTV reality series ‘Geordie Shore’. Additionally, he also appeared in the second series of ‘Ex on the Beach’. More Bio…