American golfer Gary Woodland is married and a father of three.

Gary Woodland is currently in a married relationship. He has tied the knot with his longtime girlfriend, Gabby Granado. The couple exchanged vows in 2016 and in 2017, they had lost one of the twins.

Their son named Jaxson was born prematurely. Then in Aug 2019, this couple welcomed their twin daughters Maddox and Lennox. 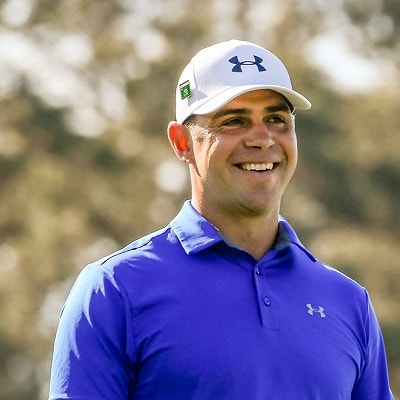 Taxes are nice in Florida

Enjoy the pressure. Enjoy the stress. Enjoy being uncomfortable. And don't shy away from it, embrace it

No matter what I've done, from when I was a young kid, I always believed I would be successful.

Who is Gary Woodland?

Gary Woodland is a famous American golfer who competes on the PGA Tour and had won the first PGA title of his career at the Transitions Championship by one stroke.

He was born on May 21, 1984, in Topeka, Kansas, USA. He was born to parents, Dan, and Linda Woodland. He has not disclosed any information regarding his siblings. He was interested in golf from an early age.

Gary holds American citizenship but his ethnicity is Caucasian.

He attended Shawnee Heights High School in the suburb of Tecumseh and then attended Washburn University.

He left after his freshman year to attended the University of Kansans on a golf scholarship where he studied Sociology.

Gary Woodland began his professional golf career in 2007and entered the Qualifying school for PGA Tour at the end of 2008 where he finished in a tie of 11th which helped to play on the PGA Tour in 2009.

Gary made 8 cuts in his debut season in 2009 but later got a shoulder injury. After a year, he managed his time in order to play PGA and in Nationwide Tours.

He won his first PGA Tour title at the Transitions Championship by one stroke in March 2011. In addition, he won the Omega Mission Hills World Cup with Matt Kuchar in November 2011. He reached the final of the 2015 WGC-Cadillac match Play but he lost to Rory.

Similarly, Gary Woodland has won his third PGA Tour Event in February 2018 at Waste Management Phoenix Open in a sudden-death playoff against Chez Reavie. Also, he made his move up to fifth in the season of FedEx Cup standings.

He held the lead entering the last round at the victors just Sentry Tournament of Champions in January 2019 at Kapalua Resort in Maui, Hawaii. In addition, he won the U.S. Open, his first major championship, and his sixth professional victory in 2019.

As of 2022, he has an estimated net worth of around $14 million and he has earned that sum of money from his professional career.

He has earned $2,208,500 from his Golf career and earned additional income from his several sponsors.

Gary has been successful in keeping himself far from rumors and controversies in her personal and professional life.

He has a smiling face and a charming personality and has an attractive body figure.