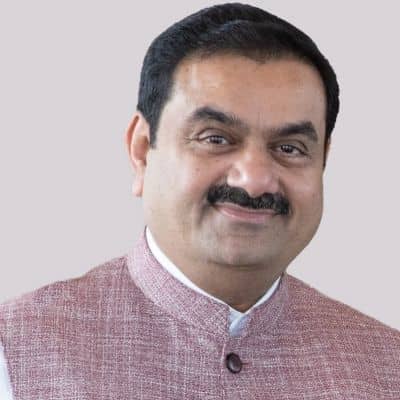 Who is the lovely wife of Gautam Adani?

The multi-billionaire Gautam Adani is happily married to his wife, Priti Adani. She is a Dental surgeon and managing Trustee in the Adani group of companies.

How many children does Gautam Adani have?

He has two sons.

What is the name of Gautam Adani’s first child son?

What is the name of Gautam Adani’s second child son?

There is no info on his past relationships or affairs. It seems like he has not dated anyone before getting married.

Who is Gautam Adani?

Gautam Adani is a multi-billionaire business tycoon. Adani is the chairman and founder of the Adani Group, which is an Ahmedabad-based multinational conglomerate.

In July 2022, he has become the 4th richest person in the world with a total net worth of $115.4 billion toppling Microsoft founder Bill Gates.

In August 2022, he became the 3rd richest person in the world after surpassing French business magnate, investor, and art collector, Bernard Arnault.

Gautam Adani was born on 24 June 1962 in Ahmedabad, Gujarat, India. He belongs from Gujarati Jain holding an Indian nationality. According to the astrologers, his birth zodiac sign is Cancer.

The business tycoon was born to his father, Santilal Adani, and mother, Shantaben Adani. While he was young, his father was a small textile merchant. Talking about his siblings, he has 7 of them.

As per his academics, he completed his schooling at the Sheth Chimanlal Nagindas Vidyalaya school based in Ahmedabad. Later he joined Gujarat University for a bachelor’s degree in commerce. But after the second year, he dropped out of the university as he was keen on business from the beginning.

When he was 18 he left Ahmedabad and shifted to Mumbai. He was enthusiastic and a person who wants to do something big. Though he had only 100 rupees, he wished to make it big and double.

Initially, he worked at the Mahindra Brothers and after some years, he started his own diamond brokerage business. Fortunately, his business went well and he turned into a millionaire by the time he became 20.

Later, he went back to Ahmedabad and began working with his brother. Within a short time, he started a commodity trading business, that imports Polyvinyl Chloride (PVC).

Then, he founded Adani Exports Limited in 1988. In 1996, he established Adani Power Limited, the power business subsidiary of Adani Group. It dealt with diversified businesses in logistics, agribusiness, and energy. Even in 2015, the group was ranked India’s most trusted infrastructure.

The Solar Energy Corporation of India (SECI)’s solar bid was won by Adani in May 2020. He received a 74% stake in Mumbai International Airport in September 2020.

Recently, in February 2022, he was enlisted in Asia’s richest person, Mukesh Ambani. Then, he possessed Ambuja Cements and its subsidiary ACC from Holcim Group worth $10.5 billion in May 2022.

In July 2022, he reached the position of 4th position, by topping the Microsoft founder, Bill Gates. Adani even announced that he would be donating $20 billion from his wealth to his non-profit organization.

Various Indian, as well as international magazines and news report, has covered his news. So, he is famously known for being a multi-billionaire.

As of July 2022, Gautam Adani has a net worth of about 116 billion USD, according to the Forbe’s Real-Time Billionaires List.

The Indian Business Mogul is currently stealing the headline after he has become the 4th richest man in the world.

Gautam Adani stands at the height of 5 feet 6 inches weighing around 85 Kg. Similarly, he has a brown complexion along with a pair of black eyes and hair of the same color as well.

Moving on to his social media presence, there is an Instagram account under Adani’s name which is enriched with more than 115K followers.

On the other hand, there is an unverified Twitter account with his name, having around 642.4K followers.

On top of that, there are several Facebook pages with the business tycoon’s name that have garnered a decent number of followers.