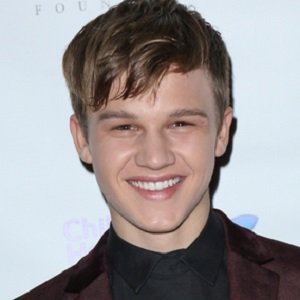 Cute and handsome Gavin is an unmarried boy. He is in a relationship. He is dating a girl named Brooke Sorenson. She is also an actress and a model.

Both the actors are happy with each other and there are no rumors of a separation.

Who is Gavin MacIntosh?

Gavin MacIntosh is an American teen actor. He is extremely prominent for his role in ‘The Fosters’, ‘Bones’, ‘American Fable’ and ‘Raising Hope’. He came in an entertainment industry at a very young age as a child actor and a model.

Gavin was born to American parents on March 22, 1999, in Tucson, Arizona, U.S.A. His nationality is American and belongs to mixed(German, Irish, and Portuguese) ethnicity.

His birth name is Gavin Powers MacIntosh. He is very close to his mother and father. He keeps posting the pictures with his mom and dad on his social media handle. His father name is Dustin MacIntosh and mother name is Cynthia Power McIntosh.He has two siblings named Grant MacIntosh and Gage MacIntosh.

He spent his childhood in Hermosa Beach, California.

Gavin went to Mira Costa High School in Manhattan Beach. He graduated in the year 2016.

Gavin started his professional acting career at the age of eleven in 2010 and appeared in the film titled “Turns”. Next year (in 2011), she made her T.V debut and appeared in one episode of T.V series “Parks and Recreation” as ‘Wayne’. In the same year, he appeared in more than seven films including “The Art of Paying Rent”, ‘Blood Games: Sanctioned to Die”, “Sweet Dreams” and “The Bluewater Tale”.

He was highly popularized after appearing in the 2015 T.V series titled “The Fosters” as ‘Connor Stevens’ in a recurring role. Currently, he is starring in a series titled “Bones” as ‘Parker Booth’ since 2015. He hasn’t won any awards so far; however, he is working hard to make stand himself on the front line.

Gavin MacIntosh: Salary and Net Worth

He has an estimated net worth value of $40 Thousand dollars but his salary is not revealed yet.

Currently, there are no drastic rumors regarding Gavin’s personal and professional life. It seems like he is doing best job without harming others for which he hasn’t been a part of controversy yet.