Gavin Rossdale is an English musician and actor. He is currently possibly single.

Gavin was previously married to the famous American singer and songwriter Gwen Stefani. The couple dated each other from 1995 for several years before getting married. They were very serious about their relationship since the beginning of their affair.

After years of their affair, the couple got married on 14 September 2002. Their wedding was a grand affair. The couple together had three children named Kingston James McGregor Rossdale(2006), Zuma Nesta Rock Rossdale(2008), and Apollo Bowie Flynn Rossdale(2014).

After 13 years of their marriage, the couple divorced on 25 October 2015. After that, he dated Mindy Mann their nanny, and Mindy is said to be the reason for their divorce.

In 1988, he has been in a relationship with Perl Lowe, an English actress. They together have a baby girl Daisy Lowe(1989) which was revealed by Pearl in 2004. In the 1980s, when he was a teen, he had dated Marilyn (Peter Robinson), an English pop singer.

He also had a fling with Suze DeMarchi, an Australian singer, and songwriter. He stated that he had written songs dedicating her. 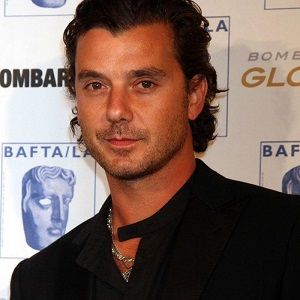 A happy wife is a happy life.

Being real is what is important.

Wherever you look there are inspirations, books, literature, paintings, landscapes, everything. Just living is an inspiration.

Who is Gavin Rossdale?

He is popular for his songs like “Glycerine” and Swallowed.

Gavin Rossdale was born as Gavin McGregor Rossdale on 30 October 1965, in Kilburn, London, England, UK. He is the son of Barbara Stephan Bowie(mother), a former model, and Douglas Rossdale(father), a doctor.

His nationality is American and he is of Ashkenazi Jewish and Scottish ethnicity.

Gavin’s parents divorced when he was 11, and he was raised by his father and aunt. He has a younger sister, Soraya, and an older sister, Lorraine Rossdale. He also has a stepsister, Georgina and she is a doctor.

When he was 12, he started working. He used to work at a London pub, Pepper Pot House. He worked here until the age of 14. He had an interest in music since his childhood days.

Gavin Rossdale began his music career when he was 17 years old. During his high school days, he formed a band called Midnight. He became the lead singer and songwriter for the British post-grunge rock band Future Primitive’ in 1992. Later in 1994, the band changed its name to Bush.

Their debut album, Sixteen Stone (1994) was a huge commercial success. Their other albums were Razorblade Suitcase, Deconstructed, The Science of Things, and Golden State.

They became more famous in the USA than in the UK. Along with success comes criticism. The band was criticized by critics saying they plagiarise Nirvana and Pixies. They were one of the commercially successful bands in the nineties. But in 2002, the band split but not officially. As of 2022, he has an estimated net worth of $45 million.

In 2004, Gavin formed another band named Institute and in 2005 the band released the album Distort Yourself but the album could not become as successful as Bush.

Movies and Other Work

In 2013, Chris Martin presented him with the award for International Achievement in Songwriting in the Novello Awards Show.

At the 10th Annual Independent Music Awards, Rossdale was chosen to be a judge of the show.

He has been a successful musician and actor in his career and he has accumulated a net worth of 45 million dollars. But his salary is not disclosed.

Rumors are that Gavin cheated on his wife Gwen Stefani with some other partner. Also, there were rumors that Gavin is gay but he stated that he was gay till the age of 17. In 2016, he was rumored to have an affair with the ex-wife of Tiger Woods, Elin Nordegren.

Gavin has been dragged into controversy as his neighbor called the police complaining about the loud noise coming from Gavin’s home late at night. Gavin defended himself by saying that he was having a house party.

Gavin Rossdale has an attractive height of 6 feet 1¼ inches and their weight is 86 kg. His hair and eye color are dark brown.

About his body measurement, his chest size is 43 inches, his biceps is 15.5 inches and his waist is 35 inches.

Gavin Rossdale happy but also concerned that his children with his ex-wife Gwen Stefani are more time with her boyfriend Blake Shelton!