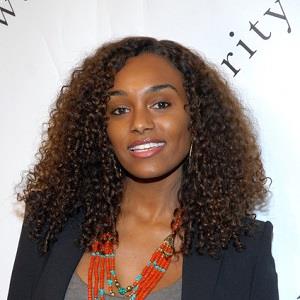 Life is a perspective and for me, if a human being has access to school, clean water, food, proper health care, that is the basis of human rights

I'm learning simplicity and how to wear my body. I'm enjoying life and trying to be the best me

Modeling is not something you excel because you are clever but is based on physical appearance, but then you have to be a businesswoman, like, to keep your longevity.

She has  a relationship with Tyler Perry, an American actor since 2007 and have a child, son Aman Tyler Perry who was born on November 30, 2014.

Who is Gelila Bekele?

Gelila Bekele is an Ethiopian model. Gelila Bekele  is a humanitarian, social activist, and filmmaker. She flies on assignments between Europe and the United States.

She is  known for Anbessa and Full and has appeared in various runway shows and has been involved in numerous advertisement campaigns.

Gelila Bekele was born in Addis Ababa, Ethiopia on September 4, 1986 and of Ethiopian ethnicity.As a child, She always dreamt of being a model  and it didn’t take long for her to start a modeling career.

She has a sister named Anna Wossetti.

Initially, Gelila worked with Ford Models. Her involvement with the modeling company helped her a lot as she then appeared in numerous beauty campaigns including ‘Pantene’,  ‘L’Oreal’, ‘Levi’s’. She was involved in various ad campaigns for these companies. She has also appeared in numerous fashion magazines including ‘Glamour; ‘Marie Claire’, ‘Allure’, ‘Lucky’ and ‘Essence’. Her appearance in the campaigns has made her recognized far and wide.

Her long and curly hair has been her trademark for several years. Apart from her acting and modeling career, Gelila has also been an eminent figure in social works and humanitarian works.

She has been supporting numerous charity works as a philanthropist and spends most of her time working to help the people of the third world nations by uplifting their living standards.

She is an active activist for ‘Charity: water’ and other numerous projects that help people in need around the world. Through her charitable works, Gelila has been a role model for numerous people and people often praise her for her involvement in these projects.

She spends time between Europe and the United States. She is also the author of the book  ‘Guzo!’ (2016).

Gelila Bekele has an estimated net worth of around $1 million.