Posted on November 7, 2022 | Published By: Selina shamp | In Married , Pregnant
Share this 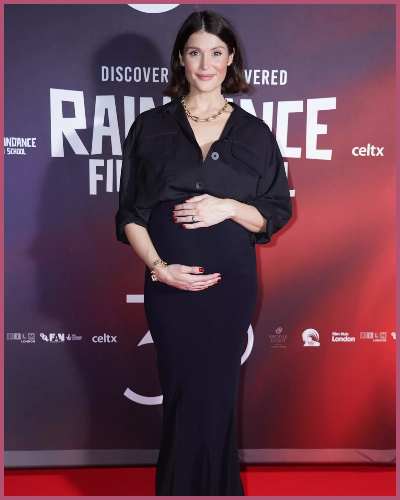 Gemma Arterton, 36 is expanding her brood with her husband Rory Keenan!

Rory Keenan’s wife Gemma Arterton is going to be a mother for the first time. The 36-year-old actress walked the red carpet at the Raindance Film Festival awards while debuting her pregnant belly and cradling it.

Arterton is styled in a black satin button-down shirt with a body-hugging high-waisted black maxi skirt for the event. Talking about having kids she said,

“I’m a neurotic person and a worrier anyway, and I think, ‘Oh God, when I have kids am I still going to be able to do all this? When we were kids my mom and my grandmother didn’t work, and I think that made them sad. That has influenced me.”

Arterton and the Peaky Blinders actor are embarking upon their forthcoming parenthood journey.

“At the beginning of my career, I was poor as a church mouse and I was happy just to be able to work and earn a living. I still get criticism for accepting Quantum of Solace, but I was 21, I had a student loan, and you, know, it was a Bond film.”

Also, Read Sophia Grace Brownlee is Pregnant! A child star-turned-YouTuber is expecting her first child with her boyfriend

Who is Gemma Arterton?

Gemma Arterton is an English actress and producer who portrayed Bond Girl Strawberry Fields in the James Bond film Quantum of Solace (2008).

Also, Read Molly Bernard Is Pregnant With the First Baby of her Wife Hannah Lieberman!

Gemma Arterton and her Peaky Blinders actor husband are now announcing the pregnancy in November 2022. In their three years of marriage, they are living their dreams and a happy conjugal life.

They tied the knot in a secret ceremony in Ireland in Sept. 2019 after a few years of dating. They first met in 2017 as the boh appeared in the play St. Joan by George Bernard Shaw on London’s West End.

Arterton was previously married to Stefano Catelli in 2010 but had an unfortunate split in 2013. The marriage couldn’t sustain long and thus. divorce was finalized by consent at the Central Family Court in High Holborn in August 2015.