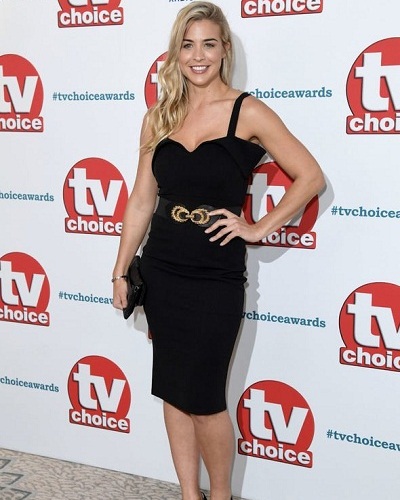 Gemma Atkinson is at the top of the world,. Two months back she delivered a baby and now she has bagged a photo shoot. She took to her social media to share this good news with her fans.

Gemma Atkinson and her photo shoot

It has, been just two months that Gemma Atkinson delivered a baby. And now she also has made progress in her professional life. She informed her Instagram followers about it. On this Friday 20 September 2019, Gemma posted a beautiful snap of her with hair in a wet-style and a chicly-smudged swipes of black eyeliner. She captioned this post:

“Friday face! My next shoot is booked… I’ll be seeing my old glam self again in a month!”

“(For a few hours only then it’s back to dry shampoo and baby sick.)”

Gemma Atkinson and her new motherhood

Gemma is enjoying every bit of her motherhood and puts up updates on her social media about it fir her fans. She gave birth to baby Mia this July and it is her child with Gorka Marquez. Just one day before the announcement of her next photo shoot, Gemma had uploaded the pictures of her two pet dogs Ollie and Norman when they first met little Mia.

The photo was clicked when Gemma had just arrived home from the hospital post-delivery with little Mia. She captioned the series of photos:

“I’m asked a lot how Norman and Ollie are with Mia and how they were introduced. The first three slides here was the day after I came home from the hospital. We sent home one of Mia’s babygrows for them to smell before we arrived.”

“I knew they would jump up at me excited as they hadn’t seen me for almost a week, so I protected my stitches with my pillow, had five mins alone greeting them which I loved after being in the hospital. Then we lay Mia in her carrycot with her net on to allow them to smell her without getting too close. After ten mins, I then held Mia and allowed them to do the same. Mia slept the whole time and within 15 mins of them realizing she wouldn’t do anything the boys were bored. The rest, as they say, is history!”

“They have accepted Mia as the new pack member.”

Actress Gemma and Gorka met in 2017 on the show Strictly Come Dancing. They confirmed that they were dating after few months of the show in February 2018. They were spotted kissing each other in January 2018. The couple celebrated Christmas together. In February 2019, they announced that Gemma was pregnant with their child and in July, Mia was born.

Gemma Louise Atkinson is a British actress and former glamour model known for playing Lisa Hunter on Hollyoaks. Similarly, she was on three spin-off series, Hollyoaks: After Hours, Hollyoaks: Let Loose and Hollyoaks: In the City, Tamzin Bayle on Casualty and Carly Hope on Emmerdale. More Bio…