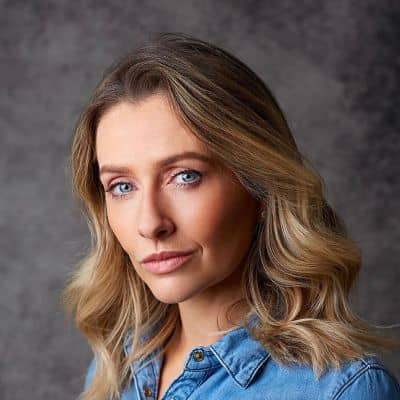 Talking about her relationship details, Gemma Merna is happily living a married life with a businessman, Ian Minton. Initially, they started dating in 2007 and were engaged to him after a long time.

Finally, the couple walked through the aisle on 27 May 2012. Their wedding ceremony was covered by Hello Magazine. However, they do not have any children at the moment.

Who is Gemma Merna?

Gemma Merna is a well-recognized English actress and model. Merna is widely famed for her role as Carmel McQueen in the Channel 4 soap opera Hollyoaks from 2006 to 2014.

Gemma Merna was born on 6 February 1984. At present, she is 37 years young star. Likewise, her birthplace is Manchester, England.

Gemma is the daughter of her father, Dennis Merna whereas her mother’s details are still not mentioned in the public. Moreover, she has two brothers named Leigh Merna and Stephen Merna, and a sister, Katie Merna.

Talking about her nationality, Merna holds a British identity whereas her ethnicity is English.

Regarding education, the actress studied at St. George’s RC High School, Walkden. Later, she attended Manchester School of Acting and pursued her acting.

A popular British actress, Gemma started her career after she joined the cast of the Channel 4 soap opera Hollyoaks in August 2006. She also won Best Comedy Performance in 2007 at the British Soap Awards.

Next year, the star appeared on the game show, All-Star Family Fortunes in a Hollyoaks v Emmerdale special. Also, she appeared on All-Star  Fortunes playing against gardener in February 2013.

Moreover, Merna performed in the spin-off show, Hollyoaks Later in the role of Carmel. She then worked in an episode of the game show, Hole in the Wall.

Going on, in 2013, she was a panelist in an episode of Big Brother’s Bit on the Side. She also participated as a contestant on the ITV diving show, Splash!, but sadly, the actress became the first participant to be eliminated from the show.

Recently, Merna performed in an episode in the television show, Doctors in 2017. She also joined former TV mum Nicole Barber-Lane as a teammate on the 28 October 2017 “Soaps” episode of Pointless Celebrities.

A famed British star, Merna has earned a handsome amount of money from her profession. He has been active in her profession from the year 2006 till 2017.

It is reported that Gemma Merna has an estimated net worth of $500k-$1 million. She is the brand ambassador of Vitzer drink, LBD Diet Plan, and so on.

Gemma has never been part of any controversial matter or rumors till now. The star has been preoccupied with her professional and private life.

It seems that Merna prefers enjoying her personal life and does not want to merge it with her professional life.

37 years young actress, Gemma has beautiful looks and an admirable personality. She stands at a height of 5feet 5inches. Also, she has a balanced body weight of 55 kg.

Furthermore, Merna has blue eyes whereas her hair is brunette. Her body measurement is 38-24-35 inches(chest-waist-hip) respectively.

Regarding her social media presence, Gemma Merna is an active personality on social media. Gemma has more than 120k followers on her official Instagram account @gemmamerna.

She is also active on Twitter with around 202.1k followers.

However, Merna is not available on Facebook at the moment.