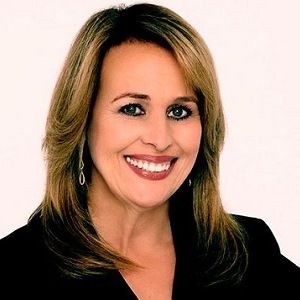 It was great. We always work well together and we enjoy working together. Just the fact that we are together raising the bar in both of our minds. We both want to be on top of our game because we've got a lot to live up to. I know Tony feels that way and I feel that way. Fortunately for us, that chemistry was still there - which was a terrific relief to me! Apparently, it's still very much alive for both of us. We're a good team.

Genie Francis is a married woman. She married Jonathan Frakes, May 28, 1988, and the couple is going very strong with their relationship.

The couple has a son and a daughter named Jameson Ivor Frakes (1994), and Elizabeth Francis Frakes (1997).

Who is Genie Francis?

Genie Francis is an American actress and she is well known for her portrayal of Laura Spencer on the ABC Daytime soap opera General Hospital.

Likely, she has also appeared on ‘All My Children’ and ‘The Young and the Restless.’

Genie Francis was born in Englewood, New Jersey, the United States on May 26, 1962, and she is currently 56 years old. Her father’s name is Ivor Francis (actor) and her mother is Rosemary Francis ( former actress/model).

She grew up in the entertainment industry. Francis told People magazine that her parents didn’t want her to follow in their footsteps, but she persisted.

Genie Francis began her acting in the two-part episode titled “Jury Duty” on the television series Family. Likely, her biggest role came in 1977 with Laura Spencer on General Hospital as she was a recast. During 1985, she starred in the miniseries North and South as Brett Main Hazard.

Francis has appeared on numerous other daytime soaps. She starred on Days of Our Lives as Diana Colville (a reporter who became involved with John Black, at the time believing himself to be Roman Brady) from 1987 to 1989 and on All My Children as a con artist and incest victim Ceara Connor Hunter from 1990 to 1992. She then returned to General Hospital in 1993.

However, in early 1997, when she was pregnant again, she took a much longer absence from the show, staying away for nearly a year and a half. During 2004, Francis appeared in Teacher’s Pet and Thunderbirds.

There is no information regarding her income, salary. Whereas, her net worth is estimated to be around $5 million according to the sources.

Francis owned a store called The Cherished Home. It was located at 31 Searsport Avenue, Belfast, Maine 04915, and they also sold items online. The store sold cottage furnishings and home accessories.

Francis sold the store in August 2012, due to her workload on The Young and the Restless. The store closed in the fall of 2012.

Genie hasn’t been linked to any known controversy, rumors, and legal issues. She is far from rumors and controversies.

Genie Francis has a height of 5 feet 4 inches and 55 Kg. Her body measurements are  35-28-36 inches respectively. Genie’s hair color is blonde and her eye color is blue.