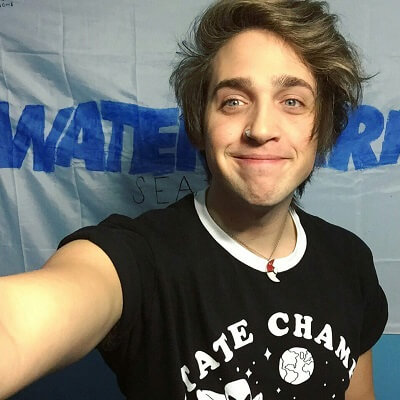 Geoff Wigington is in a relationship with Chloe Kristensen. They started dating since 2016. On 24th July 2018, the couple announced the birth of their daughter. Their daughter was born on April 2nd and she was named Farore Violet Wigington.

Their announcement was quite stunning for the fans as his daughter was already 3 months old and nobody had any clue about it. He had mentioned in his tweet that he was keeping the news as a secret to all except for his very close friends and his family.

The family of three live together happily without any rumors of separation.

Who is Geoff Wigington?

Geoff Wigington is an American guitarist. He is the lead guitarist of the pop-rock band, ‘Waterparks’. He is also the backing vocalist of the band. The band is famous for the album ‘Entertainment’ which peaked number 85 in the UK and number 98 on the Billboard 200 in 2018.

Geoff Wigington was born on July 2, 1989, in Napa Valley, California, United States. His birth sign is cancer and his ethnicity is Native American. As of 2020, his age is 30. There is no information about his parents yet. He has a sister named Rebecca.

There is no information about his educational background. He was fond of playing guitar since his childhood.

His career as a guitarist started back in 2011 when he was invited to a practice session by Waterparks through his friend who was originally going to be the bassist. He was then selected to the band after his performance.

On August 17, 2012, the band gave their debut show at Warehouse Live in Houston alongside DWHB, Life as Lions, Animate, and Invent. They then used to perform at local venues in Texas. In the same year, the band released their first EP called ‘Airplane Conversations’ on August 17.

Later, on June 5, 2014, they released their second EP called ‘Black Light’. The band was then signed with label Equal Vision Records. They also performed along with Good Charlotte during their performance at The Troubadour in West Hollywood, California.

On November 4, 2016, the band released their debut album called  ‘Double Dare’. They were also present on the All Time Low’s tour of the United Kingdom and Ireland in March 2017.

Likewise, they also participated in the United States tour for All Time Low’s Young Renegades Tour. In the same year, they released their second studio album called ‘Entertainment’ which was a hit album and was peaked at 98th position on the Billboard 200 chart on February 10, 2018.

In 2019, the band announced that they were signed to Hopeless Records and released another studio album called ‘Turbulent’ through the record.

Geoff Wigington’s net worth is around $1 million. His primary source of income comes from being a successful professional guitarist.

The average salary of a guitarist is around $67000 per annum.

There are currently no rumors or controversies concerning Geoff Wigington as he has managed to keep his profile clean.

Wigington has light brown hair along with beautiful blue eyes. His physical measurements like his height or weight are still unknown.

You may also like to read the Bio, Career, Body Measurements, Relationships, Net Worth, and more about John Turnbull, Charo, Matthew Rutler, and Jerry Trainor.