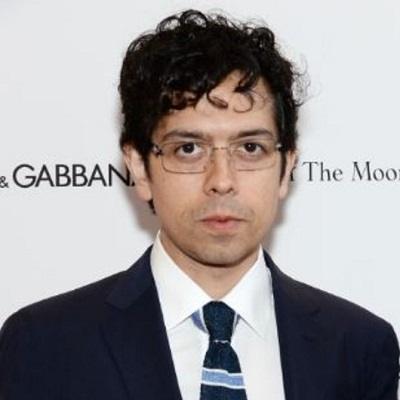 Geoffrey Arend is married to the actress, Christina Hendricks.

After dating for two years, the couple married on 11th October 2009. After ten years of marriage, the couple decided to part their way via divorce.

Last, in 2019, the couple filed for divorce. However, their divorce case is yet to be finalized.

Who is Geoffrey Arend?

American Geoffrey Arend is an Achievement Award-winning actor and director. He is renowned as McKenzie of 500 Days of Summer and Karl Benson of Garden State.

Last, in 2020, he appeared in the 5th season of the series, The Magicians as George.

Geoffrey Arend was born on 28th February 1978 in Manhattan, New York City. He is of British-Germanic ethnicity with Far-East-Asian roots.

His father, Geoffrey D. Arend Sr. is from the British-Germanic heritage whereas his mother, Sabiha Khan Arend is from Pakistani ancestry. He has a brother, Ralph Arend. Ralph is also an editor and assistant director by profession.

Moving towards academics, in 1996, he graduated from the Fiorello H. LaGuardia High School of Music & Art and Performing Arts in New York.

After graduating from college, Geoffrey Arend started his career with the TV series, Daria. In the comedy animated series, he contributed a voice to the characters like Charles Ruttheimer III, Ken Edwards, and Leonard Lamm. Following that, he voiced the character, Sean Connery and Christopher Walken in the TV series, Celebrity Deathmatch.

In 2001, he started his acting career with the comedy movie, Super Troopers in a character role as college Boy 3. The same year, he appeared in the film, Bubble Boy. The following year, he started making his appearance in the TV series as an actor. Some of his TV series’ name along with the year and character name is-

In 2009, he featured the movie, 500 Days of Summer as a supporting character as McKenzie. The movie became one of the milestones of his career. In 2011, he make his appearance in the TV series, Body of Proof as a Forensic pathology fellow, Ethan Gross, a main character of the series. The show completed its final season in 2013.

Besides acting, he has directed the short Taglines (2008) and Madam Secretary (2018) for 2 episodes.

Geoffrey Arend has black eyes with black hair. He stands at a height of 6 feet 3 inches and has a decent weight.

As of now, he has managed to maintain from any sort of controversy and scandals that created headlines in the media.

However, he has been in headlines when he announced that he is splitting with his wife, Christina Hendricks in 2019.