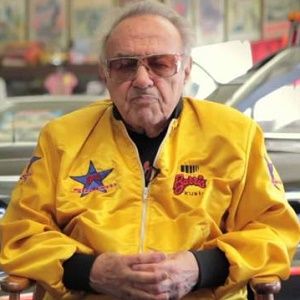 Getting my Buick on the road and track was amazing. Not only did I feel top of the world, it created a whole lot of business for our shop.

We were working all hours of the day and night, and I look back now, feeling sorry for our neighbors who must have been driven crazy by our constant sawing.

George Barris was married to a beautiful lady called Shirley Nahas on April 25, 1958.

They had enjoyed their married life until Barris’s death at the age of 89 in 2015. They have blessed two children Joji (Daughter) and Brett Barris (Son).

Besides Shirley, he was not linked with any girl or woman in that period.

Who was George Barris?

George Barris was an American designer and most famously known as a custom car builder.

He was best remembered for designing the custom car like Batmobile from Batman in 1996 and the truck from The Beverly Hillbillies in 1962.

This designer passed away on November 5, 2015, in Encino, California, the USA. The reason for his death was cancer and he was 89 years old.

George Barris was born on November 20, 1925, in Chicago, USA. He was born to Greek descent family but their name was unknown. He and his brother Sam Barris faced an early tragedy of the death of their parents.

By then they were brought up by their uncle at Roseville, California. He was of American nationality.

Barris was interested in making a car by using balsa wood at an early age of 7 that entries won the competition sponsored by Hobby Shops.  Later, he along with brother Sam has won many cars designing competitions and made their first custom car Buick.

He was educated at San Juan High School.

George Barris has put so much attention on details in his customs car which was loved by many customers and celebrities. He first built Mercury coupe for himself in 1951 and sold a similar design car naming Hirohata Merc to his customer.

This design overshadowed Detroit’s top designer in the 1952 General Motors Motorama auto show in 1952. After that, he went to design various customs for TV and film industries which include, Batmobile for Batman series, Munster Koach for Munster, and customized truck for The Beverly Hillbillies among the others.

Besides making cars for film and TV series, he has personally redesigned and customized the car for famous celebrities such as Bob Hope, Bing Crosby, Ann-Margret, Glen Campbell, and Elton John. Furthermore, he has built a Cadillac limousine for Elvis Presley, a Cadillac Eldorado turned into a station wagon for Dean Martin, and custom Pontiac station wagons for John Wayne.

George had an estimated net worth of $10 million.

There was controversy about who built the Monkeemobile car, some say Barris and some other Dean Jeffries. However, later Barris confirmed that Jeffries has built two Monkeemobile in 1996 for the TV show called Monkees TV Show.

In 2008, Barris sold the Monkeemobile which he has purchased and redesigned earlier for $360,000.

George Barris had grey color hair with black eyes. Furthermore, there is not much information about his other body measurements.

George Barris was highly active on Facebook with 57k followers. Similarly, he was active on Twitter with 772 fans following him. However, he was not active on Instagram.