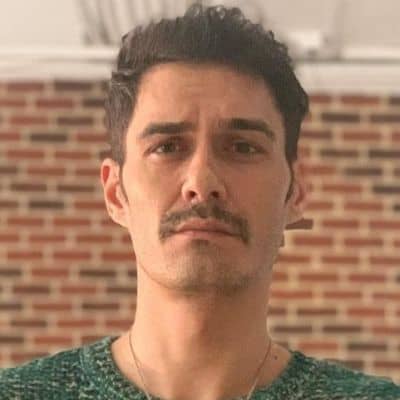 Is George Burcea Divorced Or Married?

George Valentin Burceais is a single man. As he has not made any social media announcements or posts related to his partner, it is safe to assume he is a single guy.

Moving on to his past relationship, he was married to Andreea Bălan. The couple shares two daughters, Ella and Clara.

They are not together and have decided to end their marriage. However, they have not got divorced officially, but have already rebuilt their lives with other people.

George Valentin Burcea aka George Burcea is a Romanian film and theatre actor.

The accomplished actor Burcea was born on January 15, 1988, in Eforie Sud, Romania. His nationality is Romanian and he is 34 years old as of 2022.

According to the astrological chart, his birth sign is Capricorn.

Additional info about his parents and siblings has not been disclosed in the media yet.

He completed his schooling at the local high school. Later in 2015, he graduated from the National University of Theatrical Arts and Cinematography.

Goerge begin his acting journey by appearing in the role of a soldier, in the Romanian-based featured film, Süskind in 2012. Afterward, he got his roles in a Romanian-based drama film.

In 2014, he was featured as Security Officer in the Nae Caranfil-directed comedy drama-based movie, Closer to the Moon. He was also cast in the short movie, Raid, that year.

Moving on, he was featured in the 2015 Bollywood film, Singh is Bling, along with known Bollywood stars like Akshay Kumar, Katrina Kaif, Amy Jackson, Tati Agnihotri, Kay Kay Menon, and so on.

2022 ‘s And Upcoming Projects
In 2022, George made a supporting appearance in Alecs Nastoiu’s directed and written Romanian short drama film, The Outtake. He has been cast alongside, Stephen Knowles, Adi Gheo, Daniel Nuta, Sorin Dinculescu, etc.

In addition, the actor’s appreciative acting can be seen in the forthcoming series, Wednesday. It is based upon the character Wednesday, from the fictional The Addams Family.

The series is set to release on November 23, 2022, on Netflix, and he has portrayed the role of Lurch, while working on its 6 episodes.

The net worth of handsome actor, George is estimated to be around $2 million USD as of 2022. Primarily, he earns as an actor.

As he is active in his career, it can be assumed that his income will increase in the coming future.

Fans are always too keen to know new popping news or rumors in the town related to their idol, or famed stars.

As George Burcea has a well-maintained profile in the media, he has successfully kept himself away from unnecessary rumors and controversies.

His facial appearance includes a pair of brown eyes and black hair with a fair complexion.

George is very active on social media platforms. He is active on Instagram and Facebook, having more than 172k and 128k followers.

On the other hand, he is also available on Tiktok, where he is followed by nearly, 25.9k people.

Furthermore, there is also an unverified YouTube channel, under his name enriched with over 1.3k subscribers. Usually, his shooting videos have been uploaded on it.