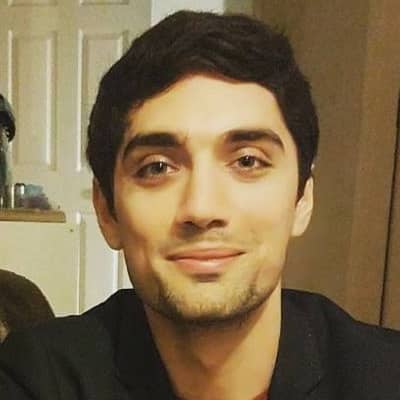 What is the relationship of George Finn?

George Finn is a very secretive person when it comes to his personal life. To date, he hasn’t introduced anyone as his girlfriend or lover.

So, he is possibly single. In further days, if he revealed anything regarding his love life then we will update it.

Who is George Finn?

The actor’s birth name is George Agiashvili was born on January 21, 1990. The birthplace of George is Tbilisi, Georgia. However, he was raised in Los Angeles, California.

He holds dual nationality of American and Georgian and belongs of Germanic descent.

He is the son of David Agiashvili and Marika Lomtatidze. His father was a Georgian film director and screenwriter who had already passed away on February 12, 2014.

He is the youngest child of his parents. He has two more siblings named Maia Agiashvili and Nika Agiashvili. Nika is also a well-known Georgian-American writer and director.

Moving towards his academics, he hasn’t yet disclosed his educational background. Nonetheless, he develops his career in his family’s footsteps.

George began his acting career at the age of twelve when he appeared in a commercial for the Volkswagen automotive brand. In 2004, he starred in the teen sitcom, ‘Unfabulous‘ where he portrayed the role of Julian.

In 2009, he made his big-screen debut in the film, The Harsh Life of Veronica Lambert in the role of Luke. The film features popular personalities like Ed O’Ross, Bart Johnson, Ricki Noel Lander, and so on.

Similarly, in the same year, he appeared in web series like Sex Ed (as Billy Henry) and Rockville CA (as Adam).

Furthermore, he has appeared in several film and television series which are enlisted below in the table,

George hasn’t been part of any sorts of rumors and disputes as of now.

He stays miles away from such controversial acts that could hamper his personal and professional life.

As per other online sources, he has an estimated net worth in the range of $ 1 million to $5 million throughout his profession as an actor.

However, his exact figure for salary, yearly income, and real estate is still under review.

The actor has a well-maintained body physics. He stands at the height of 6 feet 1 inch and has an average weight.

He has black hair with grey pair of eyes. Further, his other body measurement is not available.

The actor is active on Instagram with more than 7.6k followers.