George Lopez is a Mexican-American actor. George is not dating anyone at present. 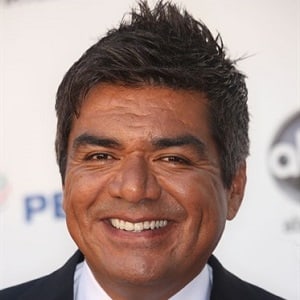 [After getting arrested on February 27, 2014, for getting drunk and falling asleep on the floor of the Ceasars Windsor casino in Ontario, Canada] Tied one on last night. Not feeling great this morning. I was trying to sleep it off, unfortunately, it was on the casino floor.

The pair dated for about 8 months before tying the knot.

Ann later filed for divorce on November 23, 2010, and the divorce was finalized on July 1, 2011. He has one daughter from this relationship, a daughter named Mayan.

At present, Lopez is believed to be single.

Who is George Lopez?

George Lopez is a Mexican-American actor and comedian. People recognize him for starring in his self-produced ABC sitcom ‘George Lopez’.

Additionally, he has appeared in several other television series including ‘Noches con Platanito’, ‘Real Husbands of Hollywood’, and ‘Shake It Up’ among others.

He was raised by his mother, his grandmother, and his step-father after his father deserted him when he was just two months old.

Additionally, he became interested in the world of acting since his childhood years.

He is of American nationality. Furthermore, he belongs to Mestizo Mexican ethnic background.

Talking about his education, Lopez attended San Fernando High School and graduated in 1979.

Lopez initially performed several stand-ups. After several years, he began appearing in various shows on television. Actress Sandra Bullock approached him to produce and star in a comedy.

Additionally, he appeared as Eddie Martinez in ‘Ski Patrol’. In 2000, he appeared in ‘Bread and Roses’. The next year, he had a role in the TV series ‘The Brothers Garcia’.

Since then, he has appeared in numerous other movies and television series. All in all, he has over 50 credits as an actor.

Some other movies and television series that Lopez has appeared in are ‘The 5th Quarter’, ‘The Garbage Can Man Show’, ‘Lopez’, ‘Noches con Platanito’, ‘Real Rob’, ‘Spare Parts’, ‘Saint George’, ‘Special Look’, ‘Shake It Up’, ‘Valentine’s Day’, ‘The Spy Next Door’, ‘Reno 911!’, ‘Swing Vote’, ‘Balls of Fury’, ‘Freddie’, and ‘Curb Your Enthusiasm’ among others.  In addition, Lopez also has 14 credits as a producer, 13 credits as a writer, and 1 credit as a director.

Furthermore, he has been involved in several charity works.

He has his own charity, The Ann & George Lopez Foundation. Time magazine named him as one of ‘The 25 Most Influential Hispanics in America’.

Lopez has not revealed his current salary. However, he has an estimated net worth of around $45 million at present.

Lopez became part of a controversy after he was seen pretending to urinate by emptying a small water bottle onto President Trump’s star on the Hollywood Walk of Fame.

This caused outrage in the media. Additionally, he became part of another controversy after he cursed a woman out at a comedy show and told her to leave.

He has also been accused of cheating on his ex-wife with a prostitute. At present, there are no rumors concerning Lopez and his career.

Also find out more about another Mexican comedian, Gabriel Iglesias.