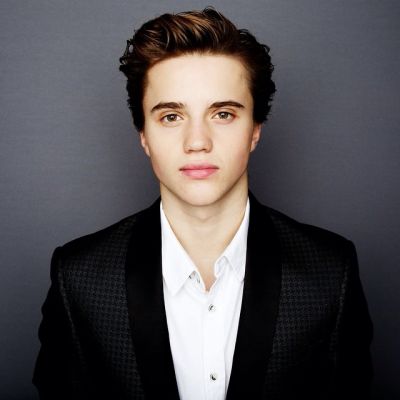 Talking about his love life, George Sear is presently single and he is not dating anyone at the moment. He might be focused on his education and shaping his career.

Moreover, Sear is very private in nature and does not seems comfortable sharing his personal things with the media and public. He has not disclosed any of his relationship news or affairs publicly till now.

Who is George Sear?

George Sear is a well-recognized British actor as well as a television star. Sear is widely famed for his role on the Disney Channel mystery adventure series, Evermoor and Hulu Teen series, Love, Victor.

Moreover, he has also worked as a presenter on the BAFTA award-winning children’s program Friday Download.

George Sear was born on 14 November 1997. At present, his age is 23 years old. Likewise, his birthplace is Leigh-on-Sea, Essex, England, the United Kingdom.

George is the son of his father, Simon Sear whereas his mother is Juliet Sear. Moreover, he has two sisters as well named, Ruby Sear and Lydia Sear. His dad is the Chief Innovation Officer at BJSS and his mother is a baking expert, food stylist, author, and hosts her own cooking show on the TV.

Talking about his nationality, Sear holds a British identity whereas his ethnicity is Caucasian.

Regarding education, the celebrity has gained his early schooling from home. He might be pursuing his graduation from the renowned university of the town.

Renowned star, George performed the part of the boy in Samuel Beckett’s Waiting for Godot at the Theatre Royal at the age of 11 years old. Additionally, he also worked with Sir Patrick Stewart and learned to play backgammon from him. Prior to this, some of his role credits include The Bill, his debut professional role.

In the year 2017, Sear portrayed the character of Billy Cooper in the TNT series, Will made by Craig Pearce. He also portrayed some of Shakespeare’s women’s characters, as was customary for the young theatre apprentice in Elizabethan England. His TV credits included a recurring guest star on season 3 of AMC‘s Into the Badlands in the year 2018.

Additionally, George is a huge fan of music. He appeared as a guest star on BBC Radio 1’s Chart Show. Also, when he is not active in acting and presenting, he enjoys practicing calisthenics. Moreover, Sear’s break dancing led him to compete in the UDO world championships in the year 2012 where he ended up being 2nd.

A talented British actor, Sear has earned a handsome amount of money from his profession and lives a lavish lifestyle along with his family.

It is reported that George Sear has an estimated net worth of $1 million. His main source of income is from the acting industry.

George has never been part of any controversial matter or rumors till now. The celebrity has been preoccupied with his professional and private life.

It seems that Sear prefers enjoying his personal life and does not want to merge it with his professional life.

23 years old, George Sear has dashing looks, an attractive body, tall height, and an admirable personality. He stands at a height of 5 feet 9 inches. Also, he has a balanced body weight of 68 kg.

Furthermore, Sear has dark green eyes whereas his hair is brown. He often tends to dye his hair in different shades.

His body measurement is 40-28-35 inches(chest-waist-hip) respectively. Sear wears a shoe size of 8 and his biceps size is 14 inches.

Regarding his social media presence, George Sear is an active personality on social media. George has more than 228k followers on his official Instagram account @gsear.

He is also active on Twitter with around 30.1k followers.

Moreover, Sear is also available on Facebook with nearly 35k fans and supporters.

Also read about Hayley Paige, Lucila Sola, and Raz B.