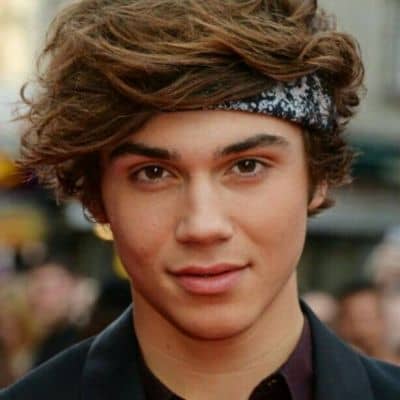 Is George Shelley Single or Dating?

George Shelley is possibly single and is not dating anyone.

After coming out as bisexual publically on February 3, 2016, he hooked up with Matthew Holehouse. As per the sources, it is known that they are not together but the reason behind their separation and more details of the relationship is still unknown.

Who is George Shelley?

George Shelley is a famous actor, singer, and presenter. He rose to prominence after appearing on the 2012 season of ‘The X Factor (UK) and was placed fourth.

George Shelley was born in Clevedon, Avon, England on 27 July 1993. Shelley is 28 years old as of 2022 and holds British nationality.

His ethnicity is Englis and according to the astrological chart, Leo is his birth zodiac sign. George Paul Shelley is his full birth name.

Dominic Shelley and Toni Harris are his parents. He has two brothers, two step-sisters named, Anabelle and Louisa, and four half-brothers. His younger sister, Harriet died in 2017 when she was hit by a car.

He went to Kings of Wessex Academy based in Cheddar and late graduated from Weston College in 2011 with a BTEC Extended Diploma in Graphic Design.

Firstly, George Shelley was part of a British band named, Only the Young. Later, they changed the band name to ‘Union J’ after collaborating with ‘Triple J’ as they were in ‘The X Factor ‘ season 9.

Josh Cuthbert, Jaymi Hensley, and JJ Hamblett were the original members of the band. The band ended their formation.

The band placed fourth in the singing reality show but went on to perform together even after the show. On March 3, 2016, George Shelley left the band so that he could continue his acting passion.

But on 31 January it was revealed that Shelley would again perform with the Union J. They announced to perform together in the 10th Anniversary show at the London Palladium.

In 2015, George signed a contract with the MN2S agency but later collaborated with ‘Coalition Talent’ where agent Vinesh Patel represented him. At ‘Cole Kitchen Ashley Vallance looked after his management.

He served as a regular presenter for the radio station, ‘The Capital Breakfast Show’ along with broadcasters, Dave Berry and Lilah Parsons in 2016.

He then hosted the ‘Brits Red Carpet’ live show and joined the ITV show, ‘I’m a Celebrity…Get Me Out of Here!’ in its fifteenth series and finished it as a runner-up.

George Shelley debuted his acting career by making a guest appearance on the British sitcom titled ‘Murder in Sucessville in July 2016.

He then appeared in series 9, the 4th episode of the ‘Benidorm’ in 2017 portraying the role of Giles. He returned in the fourteen seasons of the reality show, ‘The X Factor as co-presenter with Stacey Solomon.

His main duty was to take the interview with the finalist’s friends and families. His EP originals which consisted of ‘360,’ ‘Soldier,’ ‘Scars,’ ‘Make It Better,’ ‘Poltergeist,’ and ‘Prove Me Wrong’ were released in 2016.

George Shelley has an estimated net worth that ranges between 1 to 5 million USD while his salary and income are not disclosed yet.

George Shelley has not been involved in any rumors and controversies up to date as he has maintained a clean figure in the media.

George Shelley is bisexual and stands at the height of 5 feet 10 inches and weighs around 77 Kg.

Talking about his physical appearance, with a fair complexion he has a couple of black eyes and brown-colored hair.

There is an official Facebook page under his name, which is enriched with over 1.8K followers.

Also, there is a Tiktok account under his name which has about 2.4 K followers.

Shelley Luther is released after paying $7,000 fine to open her salon in COVID-19! Who is Shelley dating?

Queen Elizabeth II and the beauty product brands she uses!