George Soros is Hon and FBA honored investor and philanthropist. He is married and a father of five kids. 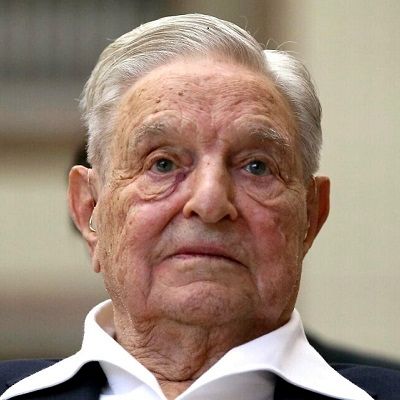 Source: The Times of Israel

Once we realize that imperfect understanding is the human condition there is no shame in being wrong, only in failing to correct our mistakes.

Markets are constantly in a state of uncertainty and flux and money is made by discounting the obvious and betting on the unexpected.

Stock market bubbles don't grow out of thin air. They have a solid basis in reality, but reality as distorted by a misconception.

What is the relationship of George Soros?

George Soros is married to Tamiko Bolton. His wife, Tamiko is the daughter of Japanese-American nurse and naval commander, Robert Bolton. The couple first met in 2008. Later, they got married on 21st of September 2013.

Previously, he was married to the American Historian, Susan Weber. They married in 1965. After 22 years of marriage, they got separated by divorce.

Together, they have two children; Alexander Soros (b. 27th of October 1985) and Gregory James Soros (b. 1988). Alexander is a philanthropist. Also, he happens to be the Deputy Chair of the Open Society Foundations.

Prior to that, Soras was married to Annaliese Witschak. They married in 1960 and got divorced in 1983. With Annaliese, he has three children including a daughter, Andrea Soros Colombel (b. 11th of June 1965), and two sons; Robert Daniel Soros (b. 1963) and Jonathan Tivadar Soros (b. 10th of September 1970).

His daughter, Andrea is the founder and president of Trace Foundation, his son, Jonathan is a head fund manager. Also, his eldest son, Robert of the founder of the Central European University.

Who is George Soros?

George Soros is Hon and FBA honored investor and philanthropist. He is popular as The Man Who Broke the Bank of England due to his short sale of $10 billion worth of pounds sterling during the Black Wednesday that occurred on the 16th of September 1992.

As of May 2020, he has donated over $32 billion to the Open Society Foundations.

George Soros was born on the 12th of August 1930 in Budapest, Kingdom of Hungary in an upper-middle Hungarian family. His birth name is Schwartz György. He is of Jewish-Germanic ethnicity with Hungarian roots.

His late father, Tivadar Soros is was a lawyer by profession whereas his mother, Lt. Elizabeth Soros was a homemaker. His elder brother, Lt. Paul Soros was also an investor and businessman.

In his teen days, he faced a similar fate like all the Jewish after Nazi Germany invaded Hungary. However, his family was lucky enough to survive as they were able to purchase documents that stated they are Christians.

Later, in 1947, he moved to England and joined the London School of Economics. At the time, he used to work as a railway porter and waiter.

George Soros started his career with several odd jobs. However, he always had an inner feeling that he was not cut to do it. Later, he wrote to every managing director in the merchant bank of London.

However, he received only two replies and got hired in a merchant bank, Singer & Friedlander of London as a clerk.

There he met the friend, Robert Mayer who suggested investing in his father’s brokerage house, F. M. Mayer.

In 1956, he moved to New York City as joined he, F. M. Mayer, as an arbitrage trader. Within a few years, he became famous for his specialization in the European Stocks.

In 1959, he moved to the investments firm, Wertheim and Co. He initially planned to stay with the firm for five years and intended to return England to study. Till 1963, he worked at the analyst of the European securities.

After that, he joined the New-York based Arnhold and S. Bleichroeder as a vice president. In 1969, he established the Double Eagle hedge fund with $4m of investors’ capital including his $250 Thousand. Four years after that, the capital of the firm increased to $12 million. The same year, he resigned from the firm.

In 1970, he founded the investment management firm, Soros Fund Management, LLC. Also, he became the chairman of the firm. After resigning for the Double Eagle, he established the Soros Funds.

Later, in 2013, the fund became one of the most successful hedge funds as the fund rise to $5.5 billion. In 2015, the fund invested the Fen Hotels that developed 5,000 rooms within the time interval of three years.

Since the 1970s, he has been actively involved in philanthropy. For the year, he has been providing funds for the education of the black students to attend the University of Cape Town.

In September 2006, he donated $50 million to the Millennium Promise to help the educational, agricultural, and medical sectors of Africa.

On 17th October 2017, he transferred $18 billion to the Open Society Foundations. The following year, he donated $2 million to Wikimedia Foundation. Also, he donated $220 million in grants for criminal justice reform, civic engagement, and racial justice groups.

Apart from being an investor, he has written books includingThe Alchemy of Finance, Invest Like a Billionaire, The Bubble of American Supremacy, and Opening the Soviet System George Soros.

As of 2022, he has an estimated net worth of $8.6 billion making him the 162nd richest person in the world. The primary source of his income is his investments.

Besides that, he happens to be the highest Earnings Hedge Fund Manager in 2018.

George Soros has blue eyes with light hair. He stands at a height of 5 feet 11 inches and weighs around 79 kg.

There are some headlines that the investor is being falsely accused of funding the protest over police killings of Black People that have roiled the United States.

Back on the 22nd of October 2018, a pipe bomb was placed at his Katonah, New York home as part of the US mail bombing attempts. The bomb was later discovered by the caretaker and got removed by the authorities.

After that, a full FBI investigation was launched. Later, on the 26th of October 2018, Cesar Sayoc got arrested for the suspicion of mailing the bombs.

You may also read the bio of Tiffany Stewart, David Winans Jr., and Roxy Jacenko.