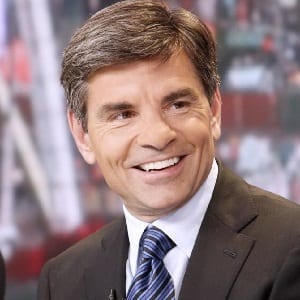 It's going to be a long, hot summer. The hotter it gets in Baghdad, the hotter it will get in D.C

The President has kept all of the promises he intended to keep.

George Stephanopoulos is a married man. He is married to actress, comedian, and writer Alexandra Wentworth. The pair married on 20 November 2001. They have two daughters together, Elliott Anastasia Stephanopoulos and Harper Andrea Stephanopoulos. Their marriage is going strong as there is no news regarding any extramarital affairs at present.

Who is George Stephanopoulos?

George Stephanopoulos is a political commentator, journalist, and former Democratic advisor. Currently, he serves as the chief anchor and the chief political correspondent for ABC News. Additionally, he is also a co-anchor of ‘Good Morning America.’

Stephanopoulos worked on the Michael Dukakis 1988 U.S. presidential campaign in 1988. He Additionally, he later became the ‘floor man’ for Dick Gephardt, U.S. House of Representatives Majority Leader. He was also along with David Wilhelm and James Carville in the 1992 U.S. presidential campaign. After George left the White House at the end of Clinton’s first term, he took the job as a political analyst for ABC News. In addition, he became the host of ‘his Week’ in September 2002. He also co-moderated, with Charles Gibson in Democratic Party presidential debate on April 16, 2008.

Stephanopoulos launched a blog titled ‘George’s Bottom Line’ during the 2008 presidential election campaign. Furthermore, he served as the keynote speaker at Columbia College’s Class Day in 2003. He has also appeared in the shows including ‘House of Cards’ and ‘Agents of S.H.I.E.L.D.’

Stephanopoulos has not revealed his current salary. However, he has an estimated net worth of around $ 35 million at present.

Stephanopoulos has been involved in several controversies in his career. He became part of the real state loan controversy in 1994. In addition, he also became part of another controversy after he was arrested and charged with leaving the scene of an accident after he had a collision with a parked vehicle in 1995. At present, there are no rumors concerning Stephanopoulos and his career.

Stephanopoulos is active over social media. He has a huge number of followers on social networking sites such as Instagram, and Twitter. He has more than 2.45M followers on Twitter. In addition, he has over 56k followers on Instagram.

Also know more about the early life, career, net worth, relationships, and controversies of other journalists like Mary Bruce, Sharyn Alfonsi, Dan Rather, Linsey Davis, and Jason Carroll.

Was It Fake? Kellyane Conway Says the Senate Health Care Bill Doesn’t Cut Medicaid; Click Here To Find Out The Truth Within The Whole Things