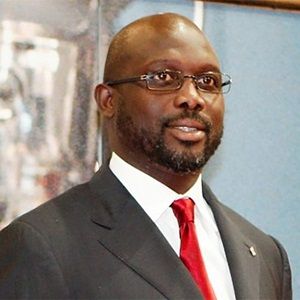 Education is a continual process, it's like a bicycle... If you don't pedal you don't go forward

My government will be open. Anyone found guilty of corruption will be dealt with in accordance with the law. If you are corrupt you will have to hang your boots

What is the relationship of George Weah?

George Weah has been legally married to Clar Weah for the last 20 years. Clar Weah is of Jamaican descent.

George Weah lives in Liberia while his wife and three kids reside in the US. His three children with Clar Weah are George Weah Jr., Timothy Weah, and Tita Weah. George Weah Jr. and Timothy are into football, while Tita is still a student.

George Weah also has been into multiple extra-marital relationships. He has children with Meapeh Gono and Mccdella Cooper.

Mccdella Cooper is also running for the Presidential candidate election. George Weah has also taken another wife named Mamie Doe as his wife. She is a Liberian and would be known as the First Lady since Clar Weah is a Jamaican.

Who is George Weah?

George Weah is a former football player. He holds Liberian citizenship. The former Ballon d’Or winner is presently a politician working for the Liberian people. Currently, he was elected as the 25th President of Liberia on 29th December 2017.

Additionally, he also won FIFA World Player of the Year in 1995. George Weah played as a striker for clubs like Monaco FC, and PSG from 1988 to 1995. Furthermore, he also played for AC Milan FC, Chelsea FC, and Manchester City Fc during his football career.

George Weah was born on October 1, 1966, as George Tawlon Manneh Oppong Ousman Weah. He was born in Monrovia in Liberia. He was a football enthusiast from a young age. Since his childhood, football always fascinated him.

The name of his father is William T. Weah, Sr. Similarly his mother’s name is Anna Quayeweah. George’s grandmother, Emma Brown mostly raised him during his childhood. He is from Kru ethnic background.

For his education, he went to the Muslim Congress during middle school. Afterward, he enrolled at Hairston High School. Later, he also attended Parkwood University and DeVry University.

George Weah started as a football player. Previously, he worked as a Switchboard technician in Liberia. In their initial football career, he played for Young Survivors Claratown and Bongrange Company from 1981 to 1985. Afterward, many appreciated his football skills and ability; he played for senior teams like Mighty Barolle, Africa Sports, and others till 1988.

He played as a striker/forward. The year 1988 turned out a golden year for him in his football career. Football coach Arsene Wenger bought him to play for the Monaco football club. He played there from 1988 to 1992 scoring 47 goals in 103 games. Then, he joined the Paris-Saint German football club. George played for them from 1992 to 1995 scoring 32 goals in 96 appearances and winning French League in 1994.

Furthermore, he became more popular and played for AC Milan FC from 1995 to 2000. He won Italian League in his first season in AC Milan. Subsequently, for his performance, he won FIFA World Player of the Year in 1995 along with Ballon d’Or. George Weah was three years away from retiring in 2000.

Then he played for moved to England and played for Chelsea FC and Manchester City FC  for a short time. Finally, he retired from the football playing for Marseille from 2000 to 2001 and for Al Jazira from 2001 to 2003. Overall during his football career, he scored 193 goals in 411 appearances for several clubs.

Moreover, he ran for Presidency in Liberia partnering up with Congress for Democratic Change. Although he lost to Ellen Johnson Sirleaf, he continued his political career. The reason behind his loss is supposed to be his illiteracy.

He went to college and got educated thereafter. Recently in 2017, he ran again for Presidency. And as of now, reports claim that he has already won the election this time. George Weah is waiting for next year to be sworn as the 25th President of Liberia.  In 2014, he ran for Senate and won. He has been running the office since January 14, 2015, as a senator.

Presently, his net worth is estimated at around $85 million as of 2022. His salary is not known.

George Weah has not been part of any significant controversy. Of course, people condemn him on many occasions for his political views.

But that is normal for any politician. Previously in 2017, George started the controversy by selecting Charles Taylor’s ex-wife as his running partner for his Presidency campaign.

Back in 1996, UEFA banned him for six games. It was a penalty for breaking the nose of Portuguese player Jorge Costa who teased him with a racist comment.

Apart from that, he is a very professional person. Additionally, he avoids any controversial topics. Presently, according to rumors, he has already won the Presidency of Liberia.

George Weah is 6 feet tall. Accordingly, he maintains his weight. Currently, he rocks the shaved-head look. He has a broad type of body. Similarly, he has brown eyes.

George Weah has 115.9k followers on Twitter. Similarly, he has more than 391.66k followers on his Facebook handle. Additionally, on Instagram, he has around 35.8k followers.

President of Croatia, Kolinda Grabar-Kitarović cant keep to herself over Croatia win in FIFA! Read about it here!