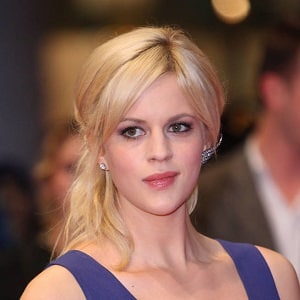 Skydiving is special because it's almost the closest to an out-of-body experience you can have. We live in such a stimulated, connected, busy world - to be up in the air with nothing but yourself and the landscape is incredibly peaceful.

I pretended to be super-cool and not be bothered by things and play off any kind of heartache when I was younger, for sure.

I'm a massive sports fan and have a lot of energy, so I'm always running around doing crazy amounts of exercise.

I grew up on Jane Austen novels and was a massive literature fanatic when I was a kid - I read everything I could get my hands on.

I do, I love to mock stuff. I am a British person.

Georgia King was previously in a relationship with actor Bradley James. They began dating in 2010. The relationship came to an end in 2012. At present, she is believed to be single.

Who is Georgia King?

Georgia King is a British actress. People mostly recognize her from her roles as Amanda Snodgrass in the 2016/2017 HBO comedy ‘Vice Principals’. Additionally, she also appeared in the American sitcom, ‘The New Normal’ which also stars Justin Bartha and NeNe Leakes.

King was born in Edinburgh on November 18, 1986, to parents Jonathan Hyde and Isobel Buchanan. Her mother is an opera singer and her father is an actor. She became interested in the world of movies and acting since her childhood years. She is of British nationality. Furthermore, she belongs to a mixed ethnic background of Scottish and English. Her grandfather is Stephen Geoffrey King. Additionally, she also has a sister.

King initially wanted to become a director. However, she later made her professional debut as Rosamond Oliver in ‘Jane Eyre’. Additionally, in 2007, she appeared as Christabel in the TV movie ‘The History of Mr. Polly’. In the same years, he also portrayed the role of Lady Mary in another TV movie ‘The Shadow in the North’. She also appeared in ‘Wild Child’ as Harriet in 2008. Since then, she has appeared in numerous other movies and television series. All in all, she has over 38 credits as an actress.

Some other movies and television series that King has appeared in are ‘Parallel’, ‘Raised by Wolves’, ‘Kill Your Friends’, ‘Vicious’, ‘Space Ark’, ‘Austenland’, ‘The Academy: Special’, ‘Sinbad’, ‘Cockneys vs Zombies’, ‘Skins’, ‘Eliminate: Archie Cookson’, ‘Comedy Showcase’, ‘One Day’, ‘Sugartown’, ‘Chalet Girl’, ‘Burke and Hare’, ‘Merlin’, ‘Poirot’, ‘St Trinian’s 2: The Legend of Fritton’s Gold’, ‘Off the Hook’, ‘Tanner Hall’, and ‘Little Dorrit’ among others. Additionally, King also has two credits as a producer and 2 credits as a director. Furthermore, she also has two credit as a writer.

King has not revealed her current salary. However, she has an estimated net worth of around $ 2 million at present.

Although not directly involved, ‘The New Normal’ where King plays the role of Goldie Clemmons was part of several controversies even before its release. This was because of the show’s boycott by the group One Million Moms. At present, there are no rumors concerning King and her career.

Talking about her body measurement, King has a height of 5 feet 9 inches or 175 cm. Additionally, she weighs around 58 kg or 128 lbs. She has a measurement of 34-24-34 inches. Furthermore, her hair color is blonde and eye color is green.

Sam Bird exits the UK when his ex Georgia Steel announces her engagement to Callum Izzard after a whirlwind romance!

Love Island actress Georgia Steel is in tears! She was dating a conman and has lost a large sum of money from her bank account!