Georgia Steel began dating Will Sykes, but their relationship ended when Steel was 18.

During her appearance on Love Island, Steel began dating Sam Bird. However, the couple broke up in October 2018. In March 2019, she began dating Medi Abalimba. 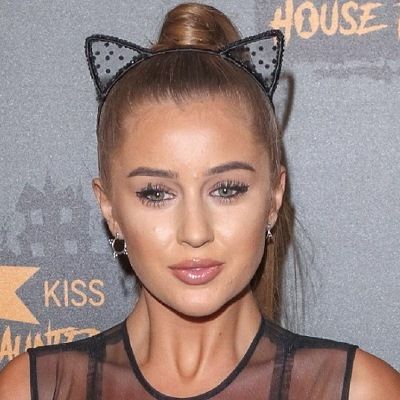 Who is Georgia Steel?

Georgia Steel is an English television personality, who rose to fame after appearing in the fourth series of the ITV2 reality series Love Island.

Georgia Steel was born in Thirsk, England on March 28, 1998, and she is currently 21 years old. Her father’s name is Rodney Lappin and her mother’s name is Sharon. When she was 3 years old, her father walked out on the family. Georgia developed terrible self-worth and loyalty issues upon growing up.

Her mother, Sharon, later got married to Andy Steel, who turned out to be a good stepfather to her. Georgia was always fascinated with the entertainment industry. There is no information about her siblings. Georgia holds British citizenship, but her ethnicity is unknown. Her birth sign is Aries.

Talking about Georgia’s education history, Georgia joined the ‘Academy of Live and Recorded Arts’ in London.

Talking about her profession, Georgia made her acting debut at the age of 15, appearing in two episodes of the British children’s sitcom ‘All at Sea.’ She was still pursuing her studies back then and could not focus on her acting career.

Additionally, she earned a huge break in 2018, appearing as one of the contestants on the dating reality show ‘Love Island.’ Earlier, the show’s format involved celebrity contestants, but after its reboot in 2015, the show began featuring non-celebrity participants.

The contestants, both male, and female were left to live in isolation in a villa located on an island. The surveillance cameras recorded every single moment of their lives there. Georgia entered the show on its fourth day and exited on the 47th day.

Before she exited, she had become a celebrity due to the boldness and charm she exhibited on the show. Her social-media fan base increased by leaps and bounds, and she received offers to appear on other reality TV shows.

Georgia Steel has a height of 5 feet 6 inches and she weighs is 54Kg. Additionally, she has a measurement of 32-24-33 inches. Georgia’s hair color is brown and her eyes color is green.

Sam Bird exits the UK when his ex Georgia Steel announces her engagement to Callum Izzard after a whirlwind romance!