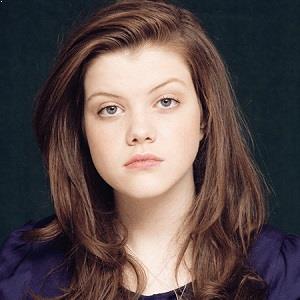 On working on the movie: "It is quite tiring and it was a bit overwhelming at first, but everyone is doing everything they can to help, so it's cool."

Lucy is quite a lot like me in a way so it was very easy to slip into her character. Lucy's the youngest of the four Pevensies and nobody takes her opinions seriously as the story begins. When she opens this wardrobe, she's in a new world and she feels as though her feelings mean something there.

[on filming The Chronicles of Narnia: The Voyage of the Dawn Treader (2010), without Anna Popplewell and William Moseley] Normally, I'm the most annoying one. So it's going to be a shame for Skandar, when Anna or Will aren't around to shut me up.

Georgie Henley dated American Actor Luke Benward for two years from 2006 to 2008. Later, Canadian actor, Keanu Pires, and Georgie were romantically linked to each other in 2009. At present, she is believed to be single.

Who is Georgie Henley?

Georgie Henley is an English actress. People mostly know her for her portrayal of Lucy Pevensie inThe Chronicles of Narnia’ film series. She has also appeared in other movies and television series like ‘Access All Areas’, ‘The Sisterhood of Night’ and ‘Perfect Sisters’ among others.

Henley was born in Ilkley, the United Kingdom on July 9, 1995, to parents Helen and Mike Henley. Additionally, she has two older sisters, Rachael and Laura. She became interested in the world of acting since her childhood years. She is of British nationality. Furthermore, she belongs to an English ethnic background.

Talking about her education, Henley attended Moorfield School for Girls before attending Bradford Grammar School. Later, she graduated from Clare College, Cambridge with a Bachelor of Arts in English on 22 June 2016.Mike

Henley won the Character and Morality in Entertainment Awards in 2006 for ‘The Chronicles of Narnia: The Lion, the Witch, and the Wardrobe’. In addition, she has also garnered the Critics’ Choice Award CFCA Award, and Empire Award nominations in 2006. All in all, she has 3 wins and 10 nominations to her name for various awards.

Henley has not revealed her current salary. However, she has an estimated net worth of around $ 6 million at present.

Henley was rumored to be dating actor Skandar Keynes during 2010. Furthermore, she has not been involved in any notable controversies to date.