Father of Four, Gerald Wallace is an NBA player who married his school friend post relationship with other women. Gerald started playing since his school days! 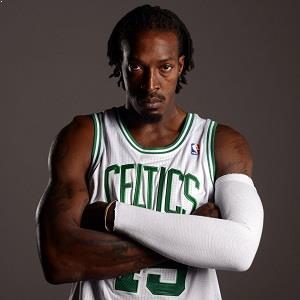 We have a problem understanding that just because we are up 12 or 15 with 3 minutes to go, that doesn't mean the game is over. We just can't do this if we expect to win and be one of the elite teams in the league

I couldn't straighten my leg or bend it. It felt like I bumped knees at first, but the pain got more and more intense. Then I didn't try to get up. I don't really know what the diagnosis is, but I'm getting ready to go over and get some tests done

We know guys are banged up and hurt, and then Brevin goes down. When that happens, other guys have to step up and make a play. Right now everybody is stepping up to the challenge.

Gerald and Daryn knew each other since childhood, specifically, since the 8th standard. They were good friends, however, Gerald had affair with other women in between, still, they were in contact with one another.

Who is Gerald Wallace?

Gerald Wallace is a well-known American professional basketball player who has been playing basketball since high school. He plays as a free agent.

He made himself known to the world with his versatility and extraordinary athleticism.

He is of African-American ethnicity.

His mother’s name is Alice Castleberry and his father died in December 2018. He has a brother named Courtney Wallace and a sister named Takova Wallace.

For his schooling, he joined Childersburg High School in Childersburg, Alabama where he was named the Naismith Prep Player of the year for his senior season efforts.

After completing high school he joined the University of Alabama for one season before declaring himself eligible for the 2001 NBA draft.

Talking about the career of Gerald Wallace, he started playing basketball professionally in 1998. He started playing from Sacramento Kings in 2001 where he made himself known to the world with his outstanding athleticism.

As part of the 2004, NBA Expansion Draft, he was selected by Charlotte Bobcats and played till 2011. In his athleticism, he suffered many injuries which earned him the nickname of ‘Crash’. While playing a match against Los Angeles Lakers, he fractured rib and suffered a partially collapsed lung being fouled by Andrew Bynum on 27 January 2009. Due to his injuries, he missed most of his matches.

On 24 February 2011, he was traded to Portland Trail Blazers but got himself again traded to New Jersey Nets in 2012. On 11 July 2012, he re-signed a four-year contract with Nets with $40 million. Then he was traded to Boston Celtics on 12 July 2013 where he played till 2015 before his trade to Golden State Warriors in exchange for David Lee.

Shortly after four days, he was again traded to Philadelphia 76ers in exchange for Jason Thompson along with cash and draft considerations. On 27 September 2015, he was waved goodbye by the 76ers and became a free agent. He has even started ‘The Gerald Wallace Foundation’ to provide opportunities for underserved children and families in Childersburg, Alabama, and Portland, Oregon.

His success in his career path has paid him well financially making his net worth estimated to be $28 million whereas his salary is $10.11 million(US).

Gerald has a height of 6 feet 7 inches. He weighs 100kg. He has black hair and black eyes.