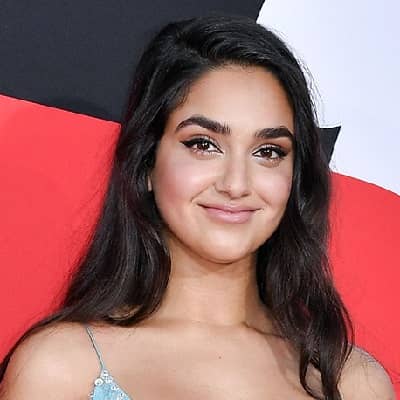 Geraldine Viswanathan is currently in a relationship. She is dating a guy named Miles Robbins.

Her boyfriend is an American musician and actor. Their love affair started in June 2018 and are still together.

Who is Geraldine Viswanathan?

Geraldine Viswanathan is an Australian actress. She is known for working on projects titled Blockers (2018), Emo the Musical (2016), and Janet King (2014).

Since 2019, she is playing one of the main casts in the TV show Miracle Workers.

She was born Geraldine Indira Viswanathan on 20 June 1995 in Newcastle, New South Wales, Australia. The names of her father and her mother are Suresh Viswanathan and Anja Raith respectively.

Her dad is of Indian ancestry and her mom is of Swiss descent. So, Geraldine belongs to Indian-Swiss ancestry.

Regarding academics, she attended the Hunter School of the Performing Arts which is in Newcastle.

Geraldine Viswanathan is associated with the entertainment industry. She has appeared in several screen projects.

She also voiced for Tawnie in an adult animated series BoJack Horseman (2019-20). Besides the small screen, Geraldine also appeared on the big screen. Her debut movie was Emo the Musical (2016).

In the same year, she played the character of Vizzie in All Out Dysfunktion! (2016). In 2020, her voiced animated movie Rumble will release. Her other acting credits are,

This actress is keeping herself away from rumors or any desperate scandals.

Regarding Geraldine Viswanathan’s body features, her height is 5 ft 6 inches and her body weight is 57 kg. Moreover, her eyes are light brown and her hair is black.