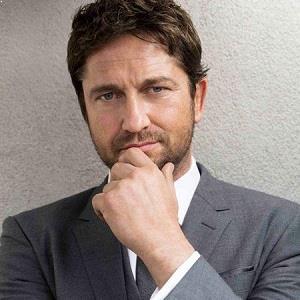 In Scotland I'm just like a lot of other guys, but in America I'm seen as a very strong, masculine guy.

On solitude: I love to spend a lot of time on my own. I can seriously go into my own head and often love to let myself travel where I don't know where I'm going. I always felt that that was his kind of form of escape, in a way.

I see a lot of actors for whom life becomes one big schedule. I guess I try to be more sensitive to my private life - to take a breath of fresh air and be in the countryside or on a golf course.

Gerard Butler dated American Model Jasmine Burgess for a couple of months from 2007 to 2008. He was romantically linked with model and actress, Shanna Moakler from October 2008 to January 2009. He also dated actress Lindsay Lohan for a brief amount of time in 2009.

At present, he is dating Morgan Brown.

Who is Gerard Butler?

Gerard Butler is a Scottish actor, producer, and singer. He gained worldwide recognition for his portrayal of King Leonidas in Zack Snyder‘s fantasy war film ‘300’.

Additionally, he has also appeared in ‘Tomorrow Never Dies’, ‘Tale of the Mummy’, and’ Lara Croft Tomb Raider: The Cradle of Life’ among others.

Gerard Butler was born in Paisley, the United Kingdom on November 13, 1969, as the youngest of three children of Margaret and Edward Butler, a bookmaker. He is currently 49 years old.

His family moved to Montreal, Quebec, when he was six months old. Butler was raised by his mother, with no further contact with his father until he was 16 years old.

He became interested in the world of acting since his childhood years. He belongs to Irish and possibly Scottish ethnic background.

Talking about his education, Butler was a head boy at St Mirin’s & St Margaret’s High School in Paisley and won a place at the University of Glasgow School of Law. Furthermore, he also attended the Scottish Youth Theatre while a teenager.

After graduation, Butler initially took a position as a trainee lawyer at an Edinburgh law firm. Additionally, he also worked as a waiter, a telemarketer, and a demonstrator of how toys work at fairs. Eventually, aged 27, he had his first professional acting job.

Less than a year later, he won a part in a theatre adaptation of ‘Trainspotting’, which he performed at the Edinburgh Festival. His film career continued with small roles, first in the James Bond film ‘Tomorrow Never Dies’. Since then, he has appeared in numerous other movies and television series. All in all, he has over 50 credits as an actor.

Some other movies and television series that Butler has appeared in are ‘Den of Thieves’, ‘Hunter Killer’, ‘Geostorm’, ‘A Family Man’, ‘London Has Fallen’, ‘Olympus Has Fallen’, ‘Machine Gun Preacher’, ‘Law Abiding Citizen’, ‘P.S. I Love You’, ‘Beowulf & Grendel’, ‘Reign of Fire’ and ‘The Jury’ among others. Additionally, he also has 14 credits as a producer and six credits for soundtracks.

Butler starred as Mike Banning again in the 2019 film Angel Has Fallen.

In addition, he has won the MTV Movie Award and Golden Camera Award.

Butler has an estimated net worth of around $ 30 million at present. His salary is unknown.

Butler has been linked with several rumors throughout his career. Over the years, he has been rumored to have been involved in relationships with Jessica Biel, Jennifer Aniston, Cameron Diaz, Naomi Campbell, and Beatriz Coelho.

Furthermore, he became part of controversy due to his feud with Brandi Glanville. His roles in various movies have also attracted numerous controversies along with his ways over the years.

Talking about his body measurement, Gerard Butler has a height of 6 feet 2 inches or 188 cm. Additionally, he weighs around 102 kg or 225 pounds.

You may also like to read Tom Hanks, Tom Cruise, and Daniel Craig.

Is Hollywood doing enough for the climate change crisis?