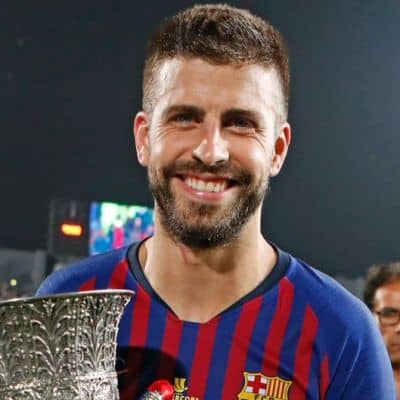 Who is the recently broken up girlfriend of Gerard Pique?

Recently on June 5, 2022, he confirmed about breaking up with his long-term girlfriend, Shakira after 11 years of being together.

The pop star Shakira announced her split from her footballer partner of more than 11 years of togetherness. She made the news official through her publicist. She did not mention the real cause of their breakup.

However, it is widely believed that the pair ended their relationship because Shakira found out that Gerard cheated on her.

How did the Relationship begin?

A year later, they confirmed their relationship.

According to multiple sources, despite the breakdown of their relationship, the couple is trying to remain friends for their sons’ sake.

Despite not being in a relationship, the estranged couple came together to cheer their eldest son Milan, 9, at his baseball tournament in the Czech Republic.

In 2008, he dated Lisa Lazarus but the duo separated within 1 year.

Similarly, he had a romantic relationship with Nuria Tomas from 2009 to 2011. But, the reason behind the duo’s separation had never been shared.

Who is Gerard Piqué?

Gerard Piqué is a Spanish footballer and social media personality. Currently, he is playing as a central defender for FC Barcelona, the team that won the 2010 FIFA World Cup and UEFA Euro 2012.

Recently, the player is in the limelight after the confirmation of his separation came out with his long term-girlfriend, Shakira.

Gerard Piqué was born in Barcelona, Spain on 2 February 1987. As of 2022, the player is 35 years old holding Spanish nationality. He maintains Caucsain Spanish ethnicity. Also, his star sign is Aquarius according to the astrological chart.

Born as Gerard Piqué Bernabeu to his father, Joan Piqué and his mother, Monsterrat Bernabeu.

Besides that, there is no further info on his siblings as well as his educational background.

In October 2004, he made his professional career debut by playing as a replacement for John O’Shea as a center-back for Manchester United. The team played against Crewe Alexandra and won the game in a Carling Cup match.

In May 2008, he signed a four-year deal with Barcelona, including a €5 million buy-out clause. By making 45 appearances in his first season, he scored three goals. Also, Pique became the team’s first choice.

While playing in the 2009 FIFA Club World, the Barcelona team won over Argentine Club Estudiantes by 2-1. He had an important role in the match.

Similarly, in 2009, he got an offer to play for the Spain national football team. In the 2010 World Cup finals held in South Africa, he played as Spain’s first-choice center-back playing alongside Puyol. Spain defeated the Netherlands by, 1-0 in the final tournament.

Then, he went on to play for Barcelona and even was part of the 2011 Champions League Final. Bu 3-1, Pique’s team defeated Manchester United at Wembley Stadium to lift the European Cup.

Piqué announced his retirement on 11 August 2018, from international football. Moreover, he earned the 10th cap for Catalonia during a friendly match against Venezuela on 25 March 2019.

After leading the team to a 2-1 victory, he retired from the Spanish national team in a few months.

His net worth comes from his professional football career and his business ventures.

Likewise, Gerard Pique has expanded his career and as of 2022, his net worth is around $80 million. The star makes a salary of $10 million.

On June 5, 2022, Gerard Pique and his former girlfriend, Shakira confirmed their official separation on Saturday morning as per the EFE agency. So, the news has got the former couple into rumors and controversies.

There is a  possibility of the existence of a third person, who would be romantically involved with Piqué, has slipped.

According to the Spanish newspapers, she would be a 20-year-old girl and it is presumed that she was not the only one, as the player was spotted at various parties with other women too.

Gerard Pique stands at the height of 6-ft 4-inches whereas he weighs around 87 kg.

The stud has a perfect athletic body. As per his body measurements, he has a chest size of 43 inches, a waist size of 33 inches, and a biceps size of 14.5 inches.

Furthermore, he has blue eyes along with brown hair.

Gerard Pique is present on Instagram and Twitter that has garnered more than 20.3 million and 20.4 million followers.

In addition, there is also a Facebook page under his name, having around 25 million followers.

Also, the Tiktok fan account under his name has been created that is enriched with about 7.7K followers.

Besides that, there is an unverified Youtube channel under his name, where the video of his game has been posted. It has around 3.75K subscribers.