Gerard Way is a married man.

He married Lyn-Z, bassist of Mindless Self Indulgence, backstage on the final date of the Projekt Revolution tour on September 3, 2007.

Previously, he was in a relationship with Eliza Cuts from November 2006 to June 2007. 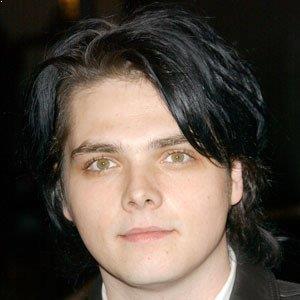 When I was writing it, I was remembering how hard it was to be a 16-year-old in high school. I always wanted to be an artist, so I was this loner kid who just got drunk all the time. I only had one real friend. There was a girl I really liked, and she ended up taking really sleazy photographs with her boyfriend, and that really crushed me, I was just swimming in this pit of despair, jealousy and alcoholism.

If for one minute you think you're better than a sixteen-year-old girl in a Green Day t-shirt, you are sorely mistaken. Remember the first time you went to a show and saw your favorite band. You wore their shirt, and sang every word. You didn't know anything about scene politics, haircuts, or what was cool. All you knew was that this music made you feel different from anyone you shared a locker with. Someone finally understood you. This is what music is about.

Surrounding myself with fans makes me feel like I'm not going through it alone.

There was a moment in my life when I really wanted to kill myself. And there was one other moment when I was close to that. But even in my most jaded times, I had some hope.

Who is Gerard Way?

He was the lead vocalist and co-founder of the rock band My Chemical Romance from its formation in September 2001 until its split in March 2013.

Additionally, he released his solo album ‘Hesitant Alien’ on September 30, 2014.

Gerard was born in Summit, New Jersey on April 9, 1977, to parents Donna Lee and Donald Way.

Throughout his early life, he was raised in Belleville, New Jersey, alongside brother Mikey Way.

He was interested in singing since his childhood years and he first began singing publicly in the fourth grade, when he played the role of Peter Pan in a school musical production.

He is of American nationality.

Furthermore, he belongs to a mixed ethnic background of Italian, and Scottish.

Talking about his education, Way attended Belleville High School until he graduated in 1995.

Later, he decided to pursue a career in the comic-book industry, and he attended the School of Visual Arts in New York City, graduating with a Bachelor of Fine Arts in 1999.

Way initially wanted to be a guitarist. Later, he worked as an intern for Cartoon Network in New York City.

Eventually, after he decided to leave his present job, My Chemical Romance began to assemble as a band.

He has contributed vocally to bands such as Every Time I Die’s ‘Kill the Music’, Head Automatica’s ‘Graduation, and others.

My Chemical Romance has released 4 albums including ‘I Brought You My Bullets, You Brought Me Your Love’, ‘Three Cheers for Sweet Revenge’, and ‘Danger Days: The True Lives of the Fabulous Killjoys’.

Way launched his Tumblr-based website where he announced that he had signed to Warner Bros Records as a solo artist in May 2014.

As a solo artist, he released ‘Hesitant Alien’ in 2014. Apart from his musical career, Way also began writing the comic-book miniseries ‘The Umbrella Academy’ in 2007.

Additionally, it was announced that Way will be making his debut in the Marvel Universe by writing for the alternate universe Spider-Man series Edge of Spider-Verse.

Furthermore, he also co-created a cartoon with Joe Boyle called ‘The Breakfast Monkey’.

Later, he made his television directorial debut on The Hub’s original series ‘The Aquabats! Super Show!’.

Way garnered the Daytime Emmy Awards nomination in 2014 for ‘The Aquabats! Super Show!’ in the category of Outstanding Writing in a Children’s Series.

Additionally, he also garnered the Chainsaw Award nomination in 2006.

The way has not revealed his current salary.

However, at present, he has an estimated net worth of around $ 20 million.

At present, there are no rumors concerning Way and his career.

Talking about his body measurement, Way has a height of 5 feet 9 inches or 175 cm.

Additionally, he weighs around 80 kg or 176 pounds. Furthermore, his natural hair color is dark brown and his eye color is hazel.

Gerard is active on social media.

Similarly, his Facebook page has more than 800k followers.