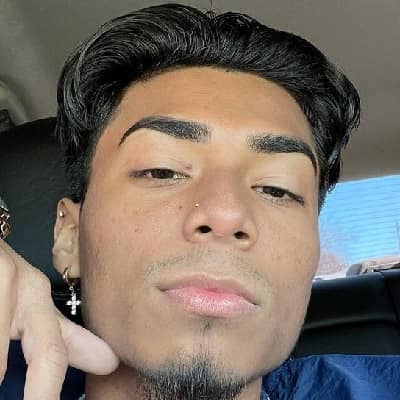 Gero Hanirias’s current relationship status is Single. Previously he was in a relationship with Paeka Campos. Paeka is an actress and model.

The couple started dating in October 2017. They had often posted together pictures on their respective social media sites. Also, they had gathered an amassed fan base through their YouTube channel.

But, the couple’s relationship doesn’t long last and they split in February 2021. However, they have not yet revealed their break-up reason.

Gero Hanirias is an American social media personality. Basically, he is known as a YouTube star who came into the limelight of the media through one-half of the Gero & Paeka YouTube channel.

Gero was born on September 3, 1999, in the United States. At present, he is 21 years old whereas his Sun sign is Virgo. The YouTube star holds an American nationality and belongs of Caucasian descent.

Hanirias has not yet disclosed his family details including his parent’s and sibling’s information to the public. Also, his academics details are under the curtains. But, he might have completed his high school education.

Previously, Gero has a YouTube channel together with his then-girlfriend Paeka under the name of Gero & Paeka. They had gained an amassed of subscribers on their YouTube channel with various content like their prank and vlog videos.

One of their most popular YouTube videos is titled “Starting An Argument Then Telling My Boyfriend I’m Leaving Prank“. But after their breakup, the channel is not active and also deleted all content of that channel. As of now, the YouTube channel is under the name of Paeka and has over 227k subscribers.

Apart from this, he is also a popular Tiktok star with more than 360.7k followers and 11.6m likes till now. Lately, he shared a Tiktok video about rapper Roddy Ricch in January 2021.

Gero’s break-up with his then-girlfriend Paeka has been a piece of prominent news in the media during their separation. Besides this, he has not available in any sorts of rumors and disputes that create headlines in the media.

Gero might have earned a fair amount of wealth but hasn’t yet disclosed the exact figure of his net worth and salary.

The YouTube star stands at the height of 5 feet 4 inches whereas he has average weight but the exact measurement of his weight has not yet disclosed. He has black hair color with brown pair of eyes color.

He has also shared his e-mail id [email protected] for any collaborations and business inquiries.