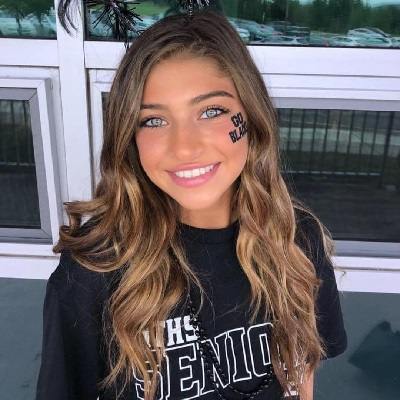 Gia Giudice’s recent Instagram post suggests that she found the love of her life. Her new boyfriend is a boy named Christian Carmichael.

She made her relationship official through her Instagram post with a picture where Christian is holding her. Also, her caption revealed a little bit more about their relationship as it stated Summer Nights W U.

Who is Gia Giudice?

American Gia Giudice is a pop-singer and dancer. She is renowned as the daughter of the Reality TV Star, Teresa Giudice.

Last, in 2019, she appeared in the reality TV show, The Real Housewives of New Jersey.

Her father, Giuseppe Giudice (a.k.a Joe Giudice) is a businessman. Joe owns as a construction business and restaurant in New Jersey. Her mother, Teresa Giudice is the reality TV star popular for the reality TV show, The Real Housewives of New Jersey.

She is the eldest among her three sisters; Gabrielle, Milania, and Audriana. They are of Italian ethnicity.

Talking about her educational background, she graduated from the Montville Township High School in Montville, New Jersey.

Gia Giudice was stepped in the entertainment world with the Bravo’s TV series, The Real Housewives of New Jersey. In the series, she came as the daughter of Teresa. Also, she often featured the series as a recurring guest appearance.

Currently, she is exploring her career in the entertainment sector as a dancer and pop-singer. She is a member of thr all-group music trio, 3KT along with her friends Alexa Maettta and Cristianna Cardinale. In 2014, they were featured on the cover of the music video, Circus.

Also, she is a member of the dance troop, The Real Unique Entertainers (T.R.U.E). As an entertainment personality, she is growing day by day and enjoys huge fan followers on Instagram too.

Her each post on the app has a significant impact on the people most of them include her beauty tips and tricks related to eyelashes and hair extensions.

As of now, she has not disclosed any details on her net worth. As a pop singer, she makes in the range of $23k to $208k.

As of now, she has managed to maintain divinity as a singer. Till the date, she has not been involved in any sort of controversy and scandals that created a buzz in the media. Also, there are no rumors related to him.

However, when the matter comes to her parents, those statements were no true. Back in 2009, her parents filed for bankruptcy putting the furniture and mansion on the sale with an auction. Later, the couple was charged to commit mail fraud, bank fraud, and wire fraud on the 29th of July 2013.

The couple stood against the charge and pleaded no guilty. Later, on the 4th of March 2014, they pleaded guilty for the charges. After that, Teresa was sentenced to 15 months in federal prison whereas Giuseppe was sentenced for 41 months with the possibility of being deported.

In 2019, Giuseppe completed his sentence and went back to Italy. He and his lawyer, James J. Leonard Jr. appeal for the decision again. However, the court denied his appeal.

Gia Giudice is a blue-eyed brunette. Her height is 5 feet 5 inches and has and weighs around 50 kg.

Recently in late July 2020, she has done a nose job. Her father Joe says that he is happy is Gia is happy.

On Instagram, she is following the personalities Hannah Ann Sluss, Joe Giudice, and Frank Catania.