Gian Marco Ferrari is currently married to his wife Valentina Marchesini. The two dated for a while before their marriage. Unfortunately, many details of Ferrari’s relationship are not available due to his private nature. Still, we know that the two have a son together who is still quite young as of 2021. 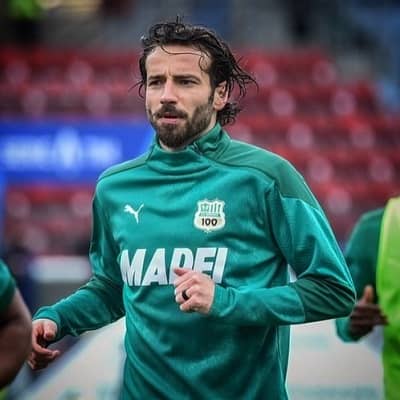 Who is Gian Marco Ferrari?

Gian Marco Ferrari is a popular Italian footballer. He is well known as the defender of Serie A club Sassuolo and the Italy national team.

He is also a part of Italy’s squad in the entertaining Euro 2020 championship.

Gian Marco Ferrari was born on the 15th of February, 1992 in Parma, Italy. As of now, his age is 29. His nationality is Italian and his ethnicity is Caucasian.

Ferrari has not revealed anything regarding his parents as of now. And not much is known about his childhood as well aside from the fact that he grew up in his hometown of Parma in Italy. He also hasn’t mentioned anything about his siblings, so he’s probably a single child.

Ferrari has not shared any details on his educational journey and qualifications as of yet. He seems to be well educated, but we can’t be certain without any information on the subject.

Ferrari started his club career in Renate in the 2000s. Then, in 2011, he joined the football club Parma on loan. After playing a few seasons with them, Ferrari was then recruited by Gubbio in a co-ownership deal in 2013. But just a season later, Parma decided to buy the Italian player for 200k Euros. Ferrari didn’t stay in Parma for long though and just a month later, Crotone signed him on a temporary deal. Crotone was impressed with his performance in the season and in 2015 he joined them on a permanent deal. Then, in 2016 Ferrari joined Serie A club Sassuolo. And aside from a few seasons on loan at Crotone and U.C Sampdoria, Gian Marco Ferrari has been a part of Sassuolo.

The senior Italy national team called up Ferrari in March of 2018. Since then he has been a part of their squad but has mostly been a reserve or substitution for the squad. He has played once for the team against San Marino in 2021, in which he scored a goal. Ferrari was also part of Italy’s squad in Euro 2020.

Ferrari has involved himself with any negative rumors or major controversies as of now.

Ferrari stands at a height of 6 feet 2 inches and weighs around 82 kilograms. He is blessed with good looks and has a lean and athletic physique. Ferrari’s eyes are brown and his hair is dark brown in color.

Ferrari is active and popular on social media. He shares updates on both his private and professional lives on his accounts. As of now, the Italian has over 11k followers on his @GMFerrarioff Facebook account and over 22k followers on his @gianmarcoferrari_13 Instagram account.

Get to know more about football players Federico Chiesa and Leonardo Bonucci as well.