Gianina Paolantonio is an actress, professional dancer, model, and singer.

Gianina Paolantonio is probably single at the moment. 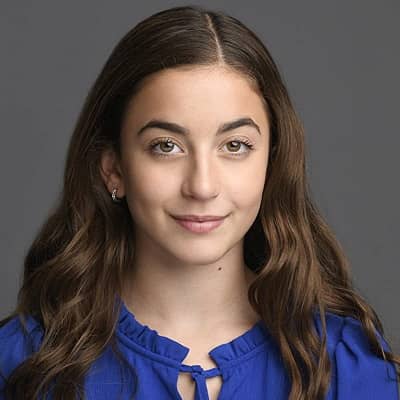 Gianina Paolantonio is an actress, professional dancer, model, and singer.  She is an expert in jazz, ballet, tap, hip hop, contemporary, and street dance.

She also appeared in the movie, The Greatest Showman and on the Season 8 of the reality television series Dance Moms.

Gianina was born on June 10, 2005, in New Jersey, USA. Her birth name is GiaNina Marie Paolantonia.

She is the daughter of Jordan Paolantonio and Joanne Paolantonio. Gianina grew up with her older brother named Joey Russomanno.

The dancer holds an American nationality and belongs to Italian ethnicity.

Gianina Paolantonio has her broadway debut with Matilda the Musical on Broadway, starring as Amanda Thripp. Gianina was just 9 years old at that time.

Performing there for 18 months, she finished the final bow in September of 2016. Along with performing on Broadway, Gianina has also danced for Mariah Carey at the NBC Rockefeller Christmas Tree Lighting. Further, she toured with Mariah in All I Want for Christmas is You tour in New York and Las Vegas.

Gianina has also performed as a Knicks City Kid at Madison Square Garden and a Brooklyn Nets Kid at Barclays Center. Moreover, she has regular dance videos for GoNoodle. from it, she promoted healthy exercise for over 11 million elementary school kids across the nation every day.

She was recently part of the Big Battle Dance Crew on the Nickelodeon show Lip Sync Battle Shorties. In it, she danced with all the performers competing for the famous “ice-out mic”.

She made her movie debut in The Greatest Showman playing a principal ballerina at Christmas 2017.

Further, she is also featured on the reality television series Dance Moms, Season 8. The show was aired on Lifetime in 2011. She appears there with her mother.

Gianina is also an ambassador for Capezio.  She has also starred in commercials such as Reese’s Peanut Butter Cups, Pace Salsa, and Simon Premium Outlets.

Further, she is an ambassador for dancewear brand Capezio.

She has built herself as a successful dancer and must have good earning through her career. As of 2022, her net worth is around $2 million.

The movie from which she debuted, The Greatest Showman received $435 million ar the box office against a budget of $84 budget.

Gianina Paolantonio stands with a height of 5 feet weighing 44kg. She is a fitness freak as well.

Likely, her body measurements are approx 28-23-35 inches. This dancer has beautiful hazel eyes and has blonde hair.

Furthermore, She has her own YouTube channel with more than 183K subscribers. She shares her vlogs, Dance videos, and many more about herself on her channel.

Also, get to know about Aaron Doh, Frimzy, Brooke Albarran, and Anthony Reeves.