Gianni Jansen is a married woman.

Gianni Jansen is married to her husband Kenley Jansen, who was born in Curacao. They took vows on December 11, 2016, and their relationship is going well till now. They were best friends until their friendship turned into a love connection. After dating for two years they announced their engagement to the world.

Then, Key’Gia Keziah Jansen, her second daughter, was born on September 12, 2021. Her husband Kenley and Gianni enjoys spending time with their children. 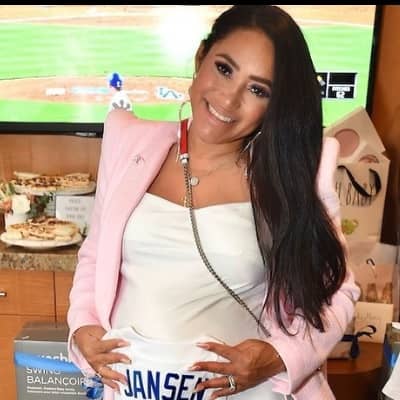 Who is Gianni Jansen?

Gianni Jansen is the wife of well-known baseball pitcher Kenley Jansen. Her husband is a former Los Angeles Dodgers Major League Baseball pitcher who just joined the Atlanta Braves. She is a famous wife who works in sales and marketing management.

There is no information in the media regarding Gianni Jansen’s current works or future projects since she does not enjoy sharing her projects works with the world.

Gianni Francisca, now Gianni Jansen, has not disclosed her actual birth date to the public. She has, however, stated that she was born on the US island of Curacao. She is an American citizen because she was born in the United States however her ethnicity is not mentioned.

Gianni Jansen has not exposed her parents’ names or occupations to the media. We also don’t know if she has biological siblings. However, on her Instagram, she has shared images of her sisters with the captions “soul sister and sister squad” and “fortunate to have those sisters in my life.”

Gianni Jansen went at Hogeschool for Economische Research. She then attended Radulphus College and graduated from the Inter-Continental University of the Caribbean.

She began working as a real estate agent after graduation, as well as in Sales and Marketing Management.

Gianni Jansen started her career as a fitness model and a real estate salesperson. However, after meeting her husband, Kenley Jansen, she quit modeling and continued to prioritize her real estate career.

She is currently the managing director of Loftier Living. She also manages the Kenley Jansen Foundation, which his husband started, and serves as vice president of that organization.

The objective of the organization is to aid and enhance the lives of families who have extremely sick or chronically ill children by providing daily support. There isn’t much information about her work because she keeps her professional life out of the spotlight.

Gianni Jansen is simply a marketing manager for the corporation. She has not disclosed any awards or nominations for which she has been recognized. Perhaps in the future, she will share her accomplishment with others.

Despite the fact that she has not received any honors, her husband has received several awards in the field of sports. Some of her hubby Kenley’s honors include:

Gianni Jansen: Net worth, Income of 2022

According to the source, Gianni Jansen is a sales and marketing manager with a net worth of $2 million in 2022.

Despite the fact that her whole net worth has been revealed, her income and compensation remain undisclosed.

She has also not disclosed the actual value of her property, residences, and other costly possessions.

Gianni Jansen has not been involved in any disputes or speculations that might jeopardize her personal or professional life.

She was unpopular before marrying baseball player Kenley. He has kept her life so professional that her name has never been in the news.

Gianni Jansen is a stunning woman who measures 6 feet tall and weighs 70 kg. Despite the fact that her height and weight are known, her physical measurements such as her hips, waist, and breast sizes are not disclosed in the public. Looking at her, she has black hair and gorgeous black eyes.

Gianni Jansen is a social media user. She is active on Instagram, where she has 43.8k followers and about 847 posts. She has posted several images of herself and her close friends on Instagram.

Gianni also shared pictures of her children. She also just posted a photograph of a baby expressing love and affection. She released a video of her genuine love for her husband Kenley Jansen around a week ago.

Gianni Jansen is also quite active on Twitter, where she joined in April 2013 and has 1038 followers. The pair also established the Kenley Jansen Foundation, where they donate money to those suffering from critical and chronic illnesses. Similarly, she is active on Facebook, where she has 4.2k friends. She also has a YouTube account called Gianni Jansen, where she has 161 subscribers.