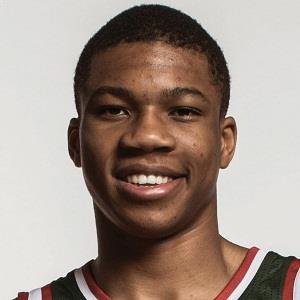 I'm serious about it, and I want to spend my money wise. I'm not going to throw away any money

Just growing up and going through life and how tough life was for me and my family, I'm always going to stay humble

To be one of the best to ever play the game? I think I have the ability to do that. But I've got to work hard. If I just keep talking and don't put some work in, it's not going to happen.

Reflecting on a personal life of Giannis Antetokounmpo, he is in a relationship. He is dating Mariah Riddlesprigger. She plays volleyball in college level and has interned for the NBA for two years. The couple is active in social media and keeps updating about each other. Mariah is also seen at Giannis’ match.

Who is Giannis Antetokounmpo?

Giannis Antetokounmpo is a well-known Greek professional basketball player. He is best known as the player for Milwaukee Bucks in National Basketball Association (NBA). He plays from a small forward and guard position wearing a jersey number 34.

Giannis Antetokounmpo was born in Athens, Greece on 6 December 1994. Antetokounmpo is of African ethnicity and has a Greek nationality. As of 2021, he is 26 years old.

He is the son of Charles(father) and Veronica(mother). His father was a Nigerian soccer player and his mother was a high jumper. He has four brothers, two elder Francis and Thanasis, and two younger Kostas and Alexis. His family has moved from Nigeria to Greece. Like other immigrants, their lifestyle of living was also hard. He started playing basketball in 2007 and at the time of 2009, he was playing competitively for the young squad of Filathlitikos.

During the 2012-13 season, he played with them in Greece’s second-tier basketball league, the Greek A2 League. Then he signed a four-year contract with the Spanish club CAI Zaragoza but opted out of his contract to join NBA. He officially made himself eligible for the 2013 NBA draft on 28 April 2013. He was selected by Milwaukee Bucks in the 2013 NBA draft. On 30 2013, he signed his first rookie contract with the Bucks and at the end of the 2013-14 season, he was named NBA All-Rookie second team. On 1 August 2015, he played for the African team in the 2015 NBA Africa exhibition game representing Nigeria.

On 19 September 2016, Antetokounmpo signed a four-year contract extension worth $100 million with the Bucks. He scored a career-high of 41 points in a match against the Los Angeles Lakers on 10 February 2017.

His success in the career path has paid him well financially. His salary is 2.995 million USD and his net worth is estimated to be $70 million.


Except for the trade rumors, he hasn’t been in any rumors but suffered a controversy for his NBA draft pick. Giannis plays for the Greece National team but this time, unfortunately, he was not able to play for Greece and the reason is said to be his knee injury.

Giannis has a height of 6 feet 11 inches. His body weighs 110kg. He has black hair and dark brown eyes.