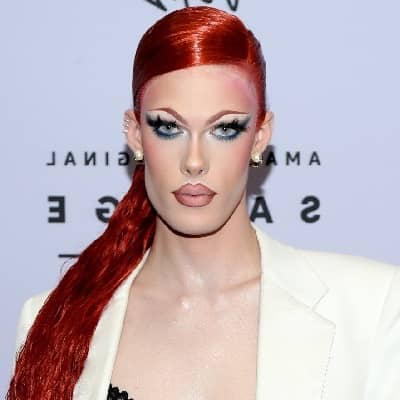 Gigi is transgender and non-binary. She shared about it via an Instagram video on August 29, 2021.

She shared that she started her hormone replacement therapy in January 2021. She has just undergone facial feminization surgery.

Talking about her relationship status, she is living her single life now. However, there were rumors about her dating Crystal Methyd. Gigi later cleared it and shared that she is currently single and doesn’t want to date.

Who is Gigi Goode?

Gigi Goode is an American reality television personality, model, actress. She rose to fame as the runner-up on the 12th season of RuPaul’s Drag Race.

Gigi was born on December 2 1997 in Woodstock, Illinois, the U.S. Her birth name is Samuel Geggie. She has Scottish and Scandinavian ancestry.

Her mother’s name is Kristi. She is a costume and interior designer. Likely she has two older brothers Ethan Geggie and Mack Geggie. They both are designers.

Geggie was firstly introduced to LGBT culture when she was 12 yrs old. She started doing drag from an early age. However, she initially disapproved of it.

She was 15 when she performed drag first time in public.

Gigi went to school in Woodstock High School and graduated in 2016. After that, she attended Millikin University in Decatur, Illinois.

She has a major in art. Meanwhile, she was also awarded the David S. Monroe Art Award in 2017. Later Gigi dropped out of university and didn’t continue her studies.

Gigi has been part of the glamour world from her initial days. She started doing modeling and has worked for various campaigns. In 2018, she appeared in Chester Lockhart’s cover of “I Put a Spell on You”.

Just in 2020, Gigi was one of the contestants on the 12th season of the reality competition series RuPaul’s Drag Race. She was the youngest contestant of that season and finished it as a runner-up.

Then she was cast in the Drive ‘N Drag concert series. Along with her fellow Drag Race contestant Valentina. she appeared in the music video for “I’m Ready” by Sam Smith and Demi Lovato.

Furthermore, Goode participated in Werq the World Battle Royale. It is a live-streamed fundraiser and drag show held during the COVID-19 pandemic.

Gigi has earned a decent net worth of around $1 million. Likely she also earns from her own merch. She sells various ranges of clothes and accessories through her merchandise.

Furthermore, she also collaborated with Christiana Audette and has their collection. Talking about her social media earnings, she reportedly charges $6k per Instagram sponsor post.

There were rumors about Gigi and Crystal Methyd‘s romance. Apart from it, she hasn’t been in any other controversial activities.

Gigi has an average height of 5 feet 11 inches and weighs around 78 kg.

Likely, her official TikTok account also holds 2.6K followers with more than 3K likes. Similarly, she has her own YouTube channel with 12K subscribers.